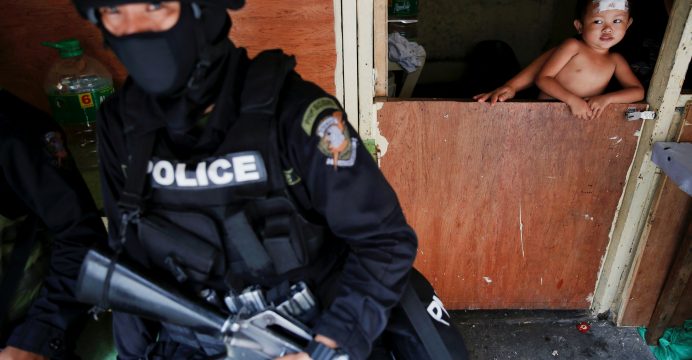 Philippine President Rodrigo Duterte suggested on Tuesday he may seek military support after withdrawing the national police from his war on drugs and handing the job to a much smaller anti-narcotics agency.

More than 7,600 people, mostly users and small-time dealers, have been killed since Duterte took office at the end of June, vowing to crack down on methamphetamine use. About 2,550 of the deaths were in police operations while the others were vigilante killings or were unsolved murders, reports Reuters.

The Philippine Drugs Enforcement Agency (PDEA) would run anti-drug operations, according to presidential spokesman Ernesto Abella. Its 1,800 staff are equivalent to just over 1 percent of the 160,000-strong Philippine National Police (PNP).

After a high-level security meeting on Sunday, Duterte said the PNP was “corrupt to the core”. A suspension of its drugs operations came a few hours later.

Duterte is furious with the PNP for the kidnap and killing of South Korean businessman Jee Ick-joo by police drugs squad officers. Jee was killed within the PNP headquarters grounds.

In a speech to soldiers on Tuesday, Duterte suggested he might need their help, saying he would be dead “if I don’t include you in the game”.

The mercurial Duterte has threatened several times to invoke military rule to help his war on drugs. Last week, he appeared to rule out declaring martial law, but said he could do so if he wished.

Presidential spokesman Abella could not immediately confirm whether the military, which has played a minor supporting role in the drugs war, would be given more responsibility.

Armed forces spokesman Brigadier-General Restituto Padilla said military involvement was discussed at the security talks, but it was not clear what that would be.

Duterte said police had been ordered to stand down from anti-drugs operations.