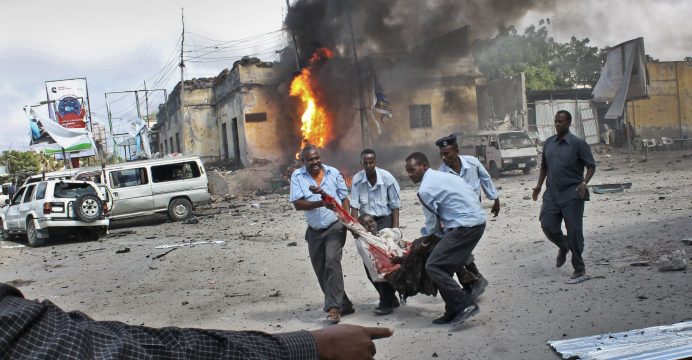 Islamist militants rammed a car bomb into the gate of a hotel in Somalia’s capital Mogadishu on Wednesday and stormed inside, killing at least 15 people, government officials said.

Gunfire rang out as fighters entered the Dayah Hotel, which is popular with politicians. A second blast shook the area shortly afterwards, injuring several journalists and others nearby.

“We have rescued the people and concluded the operation at Dayah hotel. The security forces are now inside the hotel and we shall give further details of casualties later,” he said.

Duniye Mohamed, a doctor at Madina hospital, said some of the people taken there were very seriously wounded.

“The preliminary casualty figure is 15 people dead including four security forces and 11 civilians; 51 others were wounded in the two blasts at the hotel,” Security Minister Abdirizak Umar told reporters at the scene.

Reuters pictures showed a huge flame immediately after the blast. Several cars and buildings were destroyed by the explosion.

Islamist group al Shabaab, which until 2011 controlled much of Somalia including Mogadishu, claimed responsibility for the attack.

“Well-armed mujahideen (fighters) attacked the hotel, and now they are fighting inside the hotel,” said an announcer on Andalus radio, which is linked to al Shabaab.

The insurgents often launch bomb and gun attacks in the capital in their quest to topple the Western-backed government and impose their strict interpretation of Islamic law on the nation.