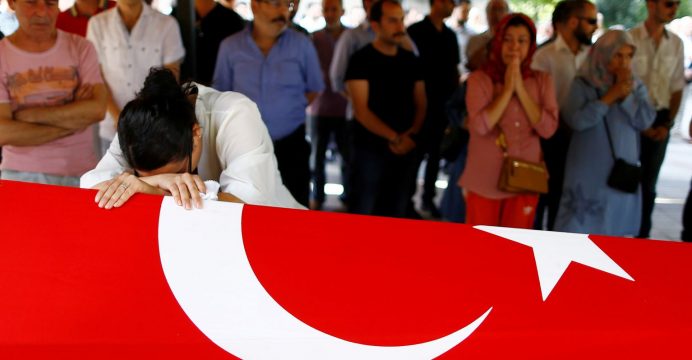 Media captionFootage shows the attacker pointing his gun as he approaches the Reina nightclub.

Turkish police have launched raids in Istanbul and arrested 12 people, as the hunt for an attacker who killed 39 people in a nightclub intensifies.

Deputy Prime Minister Numan Kurtulmus said authorities had fingerprints and a basic description, and vowed to “speedily” identify the suspect.

Some 600 revellers were in the Reina nightclub early on Sunday when the gunman attacked.

So-called Islamic State said it was behind the attack.

Mr Kurtulmus told reporters: “Information about the fingerprints and basic appearance of the terrorist have been found.

“The next step will be to try to identify him as quickly as we can. We hope we will not only find the terrorist but also his connections and those people who gave him support inside and outside the club,” he said.

Mr Kurtulmus confirmed eight arrests. Later in the evening special forces police backed by a helicopter launched an operation on a house in the Zeytinburnu district following a tip.

The attacker was not found. Four more arrests have been made elsewhere.

Turkish police also released new images said to be of the suspect, but without giving any more information about the time or location.

Turkish media also showed video purported to be of the suspect at an unidentified date and location where he is seen handing over identification documents to an official behind a glass window. The video cannot be independently verified.

Turkish media reports quote police sources as saying he may have been from Uzbekistan or Kyrgyzstan.

Police are investigating whether the suspect belongs to an IS cell blamed for an attack in June on Ataturk airport in Istanbul.

Mr Kurtulmus said the nightclub attack was a “message” against Turkey’s operations in Syria but that they would not be affected.

Turkey launched a military operation in August aimed at pushing back IS and Kurdish forces, with some of the most intensive recent fighting against IS around the northern town of al-Bab.

IS said in a statement that the attack was carried out by “a heroic soldier”.

It accused Turkey of shedding the blood of Muslims through “its air strikes and mortar attacks” in Syria.

Although IS has been linked to other attacks in Turkey, it has not claimed responsibility before.