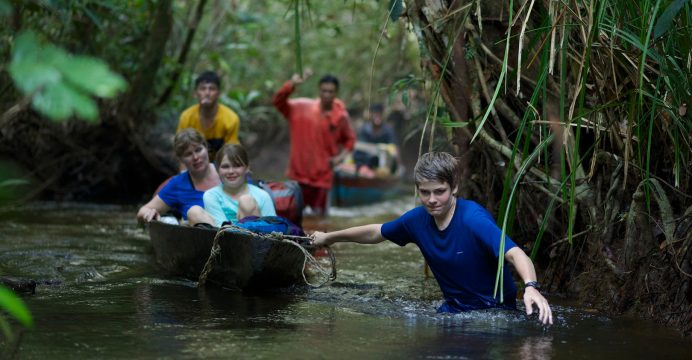 Wedding vows a blessing for clean-up of filthy Indonesian river

Only a year ago, this stretch of the Ciliwung river in Indonesia’s capital was foul-smelling and clogged by a thick layer of floating plastic and other trash.

Now, after a clean-up involving hundreds of volunteers, the river hosted a wedding ceremony for a young couple who grew up on its banks in a bid to inspire others to help preserve Indonesia’s fragile environment, reports Reuters.

“We have shown our love for our language, culture, now we should start to show our love for the environment,” said the groom, Novanto Rahman. His bride, Sandra Fidelia Novianti, is a volunteer for the Depok Ciliwung Community that launched the clean-up with the local government in 2015.

The couple made their wedding vows on an inflatable boat decorated with flowers that was paddled down the Ciliwung on Dec. 18, something that previously would have been impossible due to the piles of trash in the water.

The Ciliwung, which runs more than 100 km (60 miles) from its source in West Java to Jakarta bay, has played an important role in the livelihood of the city since the 17th century.

Despite the dire water quality, poorer communities living by the river have used its water to wash clothes and shower.

The Ciliwung, however, became a dumping ground for trash and barely able to flow into Jakarta bay. This contributed to flooding on the swampy plain of greater Jakarta, which has sunk 4 meters (13 feet) over the past three decades.

Jakarta Governor Basuki Tjahaja Purnama has relocated some illegal settlements along its banks in a bid to allow the river to flow.

The founder of the Depok Ciliwung Community, Taufiq Deso, said he hoped community help in cleaning up the river would focus the city government’s attention on the problem.

About 4,000 city workers retrieve trash from 13 rivers and hundreds of canals zig-zagging through the city of 10 million people, according to Jakarta’s Sanitation Department.

Even though there has been a reduction in surface trash on the Ciliwung, an environmentalist said better enforcement of existing laws against polluters was needed to improve water quality.

“Despite evidence that showed a few companies are guilty of releasing waste into the river, these companies are still able to continue their operations,” said Dwi Sawung of the Indonesian Forum for the Environment.