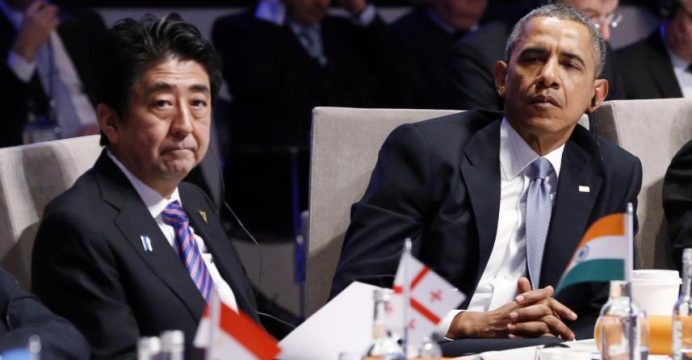 Seven months after President Barack Obama visited Hiroshima, the city where World War II all but ended, his Japanese counterpart is paying his respects at the site where the brutal conflict began.

Prime Minster Shinzo Abe is traveling to Pearl Harbor, where he and Obama hope to underscore the alliance between their two nations — 75 years after the Japanese surprise attack that brought America into history’s bloodiest war, reports BSS.

The two leaders are meeting on Tuesday in Hawaiian state capital Honolulu, on the archipelago’s Oahu island in the middle of the Pacific Ocean.

The visit has particular resonance for Obama, who was born in Hawaii and spent much of his childhood and adolescence here.

Abe and Obama will visit the wreck of the USS Arizona, where 1,177 sailors and Marines died. The ship’s rusting remains, still visible, are now a memorial.

On December 7, 1941, “a date which will live in infamy,” as then president Franklin D. Roosevelt said, Japan’s General Isoroku Yamamoto unleashed a devastating attack on Pearl Harbor’s “Battleship Row.”

The assault caught the Americans off guard, and the Japanese sunk or heavily damaged eight US battleships. The two-hour offensive killed 2,403 Americans in all and injured more than 1,100 others. An explosion in the Arizona’s ammunition stocks sealed that ship’s fate.

THE AGONY OF WAR

Just as when Obama visited Hiroshima, the purpose of Abe’s tour is not to question decisions made three-quarters of a century ago, or to offer an apology, rather to pay homage to the victims and encourage historical reflection.

“It puts a bookend in some ways to this open US-Japan conversation about the past and the war,” said Japan expert Sheila Smith from the Council on Foreign Relations.

“It puts us on a very different pedestal on the reconciliation side of things which I think is important for the region to see.”

In Hiroshima in May, during a speech given to a completely silent crowd, Obama launched an impassioned plea for a world without nuclear arms and he wrote a message in the visitor book at Hiroshima Peace Memorial Park.

“We have known the agony of war. Let us now find the courage, together, to spread peace, and pursue a world without nuclear weapons,” he wrote.

More than 16 million Americans served in uniform from 1941 to 1945 — more than 400,000 were killed. Pearl Harbor and Hiroshima marked the beginning and end of the conflict between Japan and America, but it is impossible to compare the two. One was an attack on the heart of US naval power in the Pacific, the other an atomic bomb over a city.

But each event has cemented itself in the hearts and collective memories of the people, and both places remain hallowed sites of pilgrimage to this date.

The meeting takes on special significance, coming just four weeks before the swearing in of President-elect Donald Trump, who has sent mixed and sometimes contradictory messages as to the future of US-Asia ties.

For Mireya Solis, an expert at the Brookings Center for East Asia Policy Studies, Obama and Abe will be sending a “strong message about the robustness of the US-Japan alliance.”

During his campaign, Trump suggested he wanted to renegotiate the terms of the US troop presence in Japan, where about 50,000 American personnel are stationed.

He also has promised to scrap the Trans-Pacific Partnership (TPP), a massive global trade pact that Abe firmly supports and which was designed to stop China asserting too much economic influence in the region. Trump also blasted Obama for visiting Hiroshima.

“Does President Obama ever discuss the sneak attack on Pearl Harbor while he’s in Japan? Thousands of American lives lost,” the president-elect said on May 28.

But since his election on November 8, the populist businessman has reserved his sharpest barbs for China, and Abe was the first foreign leader to meet Trump after his election.

“Trump’s foreign policy, in general, is a bit of a wildcard. We don’t really know really what he is going to do but I think the US-Japan relationship will likely stay very strong,” said Jon Davidann, a historian at Hawaii Pacific University.