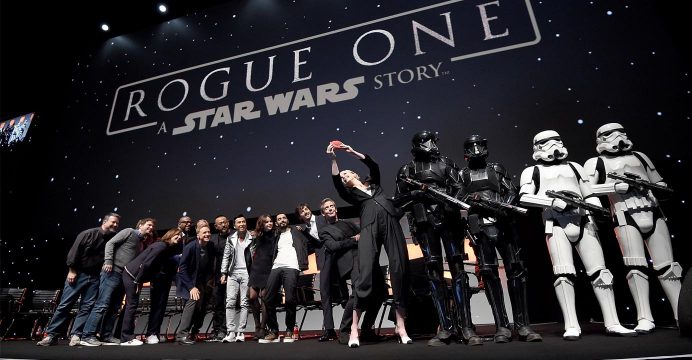 Wait nearly over for Star Wars fans as ‘Rogue One’ opens

The waiting is almost over. Hundreds of thousands of fans will finally get to see the new Star Wars spin-off film Wednesday as it opens in cinemas across Europe.

“Rogue One: A Star Wars Story” has already notched up the highest first day pre-sales ever in the US after last year’s record-breaking “The Force Awakens”.

The story, about a maverick rebel force who mount an almost suicide mission to steal the plans for the imperial Death Star, is set just before the very first Star Wars epic, “A New Hope”.

Although it has only fleeting appearances by two of the characters from the beloved 1977 movie, it has all the familiar ingredients of Stormtroopers, X-wing fighters and a cute robot character.

The first reviews, however, were mixed, with the New York Times calling it a “thoroughly mediocre movie” that millions of people would sit through anyway “and convince themselves that it’s perfectly delightful”.

The Guardian was less damning, praising it as an “exhilarating, good-natured and enjoyable adventure” though bemoaning that it felt like a “deja vu-quel”.

Nor has the hype quite reached the pitch of last year’s for “The Force Awakens” — which came a decade after the end of the last Star Wars trilogy.

Just like “The Force Awakens”, the grittier “Rogue One” has a female lead, with Felicity Jones starring as intergalactic bad girl Jyn Erso, recruited by the Rebel Alliance to destroy the planet-sized weapon of mass destruction.