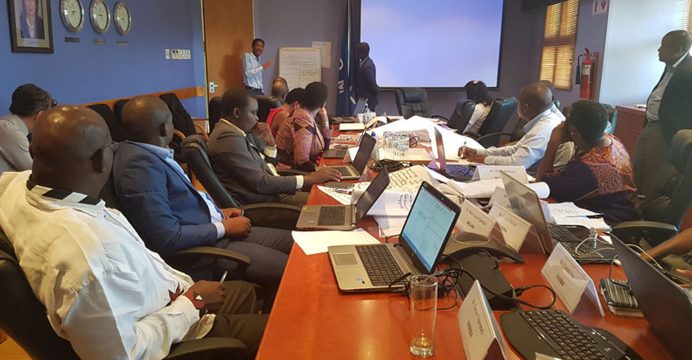 Over the last decade, countries in Southern Africa have been hit by recurrent and frequent floods, droughts and strong cyclones, which have resulted in the displacement of people in both urban and rural areas.

Severe flooding in 2015 led to the displacement of thousands of people in Malawi, Mozambique and Madagascar, while drought in Namibia prompted the country to declare a state of emergency in 2016. Such environmental emergencies require timely and effective interventions in order to prevent massive internal and cross-border displacements of people.

“Many countries in Southern Africa have established systems to respond to natural disasters and manage the consequent displacement of people. However, when disasters hit, challenges remain in terms of capacity, technical and human resources, as well as coordination,” said IOM Mozambique Chief of Mission Katharina Schnoering.

In an effort to address these challenges, IOM, with support from USAID through the Office of US Foreign Disaster Assistance (OFDA), has implemented a five-year programme aimed at building the capacities of key stakeholders involved in disaster risk management to effectively protect and assist displaced and at-risk populations in Namibia, Botswana, Mozambique, Malawi, Zambia and Angola.

As part of the project, a series of capacity-building workshops on Camp Coordination and Camp Management (CCCM) and Disaster Risk Management (DRM) were conducted with stakeholders to equip them with the tools to effectively protect and assist displaced and at-risk populations in the five countries.

A refresher training for trainers was carried out, while an additional 2,000 people were trained in all six countries. A “CCCM Coaching Manual” for trainers was produced in Mozambique and Angola, together with a “CCCM in Practice” book for all countries in both Portuguese and English. Finally, a “Mainstreaming Protection Manual in CCCM” for civil protection and civil society stakeholders was developed.

An evaluation meeting of the third and final phase of the programme took place on 5 and 6 December in Johannesburg, South Africa. During the meeting, representatives from the six project countries updated each other on actives carried out, results achieved, lessons learnt and challenges faced in the third phase of the programme. While Angola, Mozambique, Zambia, and Malawi worked to produce a strategy for the sustainability of CCCM in each country, Namibia and Botswana focused on consolidating their activities to prepare for a handover to their respective governments.

Achievements accomplished during the programme included: the inclusion of CCCM in the National Contingency Plan budget in Angola; inclusion of the CCCM approach in the National Disaster Risk Management Policy in Namibia; use of CCCM knowledge in Mozambique and Malawi during recent floods; the sensitization of the authorities in mainstreaming protection, especially gender-based violence, in camps; and capacity building for governments and communities in preparedness and emergency response, with emphasis on CCCM.