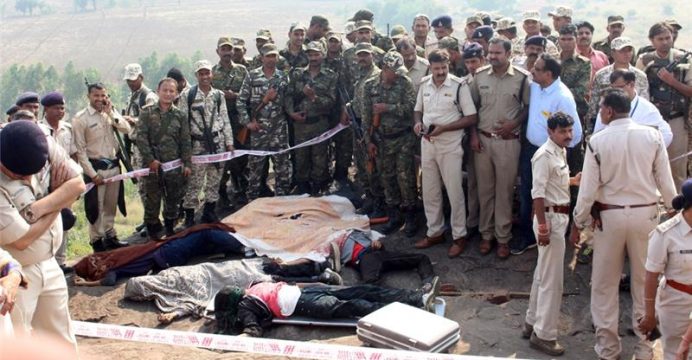 Indian police killed eight prisoners accused of belonging to a banned group as they attempted to escape from a high-security jail in the central city of Bhopal.

Authorities in the state of Madhya Pradesh said the men, suspected of being members of the outlawed Students Islamic Movement of India (SIMI), were shot dead on the outskirts of Bhopal on Monday. The had been trying to escape prison by scaling the facility’s walls with knotted bedsheets, officials said, reports Aljazeera.

Yogesh Choudhary, Bhopal’s inspector general of police, said the men were unarmed but were killed after resisting efforts to be returned to custody.

“They were unarmed but attempted to attack the police with stones. We had to shoot them,” Choudhary told AFP news agency.

Choudhary, however, later told reporters that “they had weapons and cross-firing took place”. TV images showed crude pistols lying next to the bodies, triggering scepticism in some quarters about the police version of events.

Meenakshi Ganguly, the South Asia director for Human Rights Watch, called the police’s approach “dangerous”, and reiterated calls for an inquiry into the shooting.

“Security forces have the right to use proportionate force to save lives, but it appears in this case that the suspects may not have been armed,” she said.

“The entire incident should be properly investigated. A take-no-prisoners approach to policing is dangerous and harms efforts to create a rights-respecting police force.”

Police insisted there was no breakdown in security at the prison, a supposedly maximum security facility which has a round-the-clock electronic surveillance system.

However, four officials, including the prison’s superintendent, were suspended and an inquiry has been launched into the escape.

Most of the inmates had been awaiting trial for “terror-related activities, sedition and robbery” for more than three years, although prisoners had only been detained since February.

Indian authorities have accused SIMI of carrying out several deadly bombings and of having links with armed groups based in Pakistan.

Police blamed the group for the serial bombing of Mumbai commuter trains in 2006 which killed 187 people, as well as bomb attacks in New Delhi.

The government banned the group in 2001 in the aftermath of the September 11 attacks in New York and Washington.

Hundreds of its members have been arrested over the past decade, but the group says it merely propagates an “Islamic way of life” for Indian Muslims.