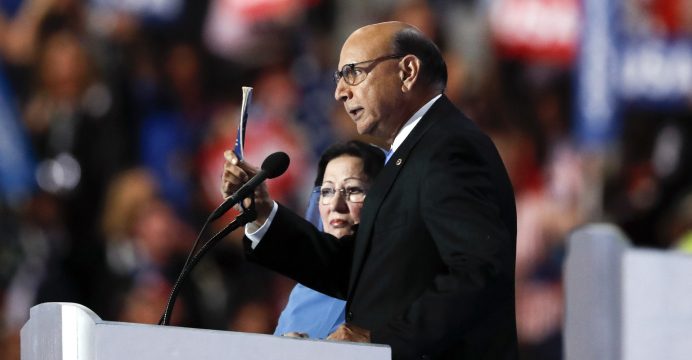 With the polish of a seasoned politician, Khizr Khan strode through the door of a seafood restaurant to the serenade of clicking cameras, clasped hands with cheering Democratic lawmakers and, as he has become famous for doing, unflinchingly argued that Donald J. Trump must not be president.

To the naked eye, Mr. Khan, whose son was an American soldier killed in Iraq and who skewered Mr. Trump at the Democratic National Convention, could have been mistaken for someone running for office. But as he made his first appearance on the campaign trail for Hillary Clinton on Wednesday, he said his mission was greater than politics.

“Donald Trump as a candidate has proven himself to be temperamentally unfit to be the commander in chief of this great nation,” Mr. Khan said, his voice shaking. “There are no second chances.”

Mr. Khan emerged as one of the Clinton campaign’s most effective weapons after he made an impassioned plea for tolerance at the convention in July and accused Mr. Trump of not understanding the Constitution or personal sacrifice. When Mr. Trump responded by insinuating that Mr. Khan’s wife, Ghazala, had not spoken at the convention because she was muzzled by her Muslim faith, he faced intense backlash for attacking the grieving mother of a fallen soldier.

In the final weeks of the race, the Clinton campaign is deploying Mr. Khan as part of a closing argument that Mr. Trump would usher in a new era of intolerance. In an emotional ad released last week, Mr. Khan spoke about the death of his son, Capt. Humayun Khan, and tearfully asked Mr. Trump, “Would my son have a place in your America?”

Although Mrs. Clinton is already polling well in Virginia, the campaign sent Mr. Khan here because of his strong appeal to veterans.

Virginians who came out to see him on Wednesday said he embodied an authenticity that had been lacking in a campaign marked by caustic personal attacks. With Islamophobia on the rise, attendees said Mr. Khan was a beacon of hope that a time for healing was ahead.

For Khayriyya Azeez, whose son was just chosen to be the chaplain at the local naval base, the way Mr. Khan publicly stood up to Mr. Trump made him a hero in his own right.

“He’s a revolutionary, fighting for the cause,” she said.

Some wondered how they should feel about Mr. Trump, and they listened when Mr. Khan said it was time to move on in spite of Mr. Trump’s initial proposal to bar Muslim immigrants from entering the United States.

“Our great religion forgives Mr. Trump for his acts, even though he doesn’t apologize to us,” said Mourad Amer, of Yorktown, who came to pray with Mr. Khan at Masjid William Salaam, a mosque in Norfolk.