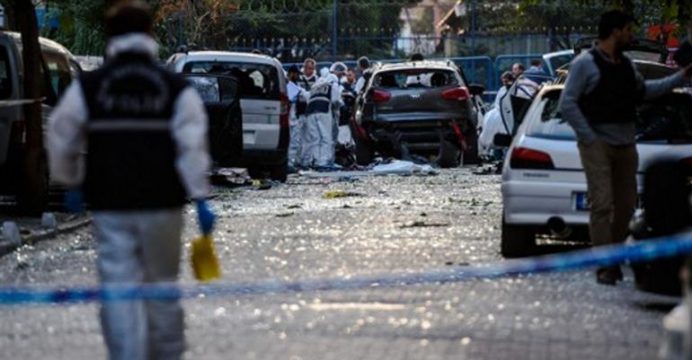 Two police officers were killed and 19 people were wounded when a car bomb exploded near a passing police vehicle in the eastern Turkish province of Bingol on Sunday, security sources said.

The bomb, planted by militants from the outlawed Kurdistan Workers Party (PKK), was detonated near the district governor’s office, the security sources said. Five police officers were among the injured, reports Reuters.

Hours before the bombing, PKK militants had attempted an attack overnight on the district governor’s home, using long-range rifles and rocket launchers, Dogan news agency reported. Two militants made it to the door of the house, but fled when police returned fire, it said.

Security sources also said that Turkish warplanes hit PKK targets in the mountainous region of the southeastern Sirnak province, near the border with Iraq. Fifteen militants were killed in the air strikes, and ammunition and weapon stocks were also hit, the sources said.

The Turkish military said in a statement that four militants were killed on Saturday in Hakkari province, also in the southeast. A total of 463 militants have been killed in military operations in the province, it said.

Turkey’s largely Kurdish southeast has been hit by waves of violence since the collapse of a 2-1/2-year ceasefire between the state and the PKK last year.

The autonomy-seeking PKK is considered a terrorist organization by Turkey, the United States and Europe. More than 40,000 people, most of them Kurds, have died in violence since the PKK first took up arms against the state three decades ago.