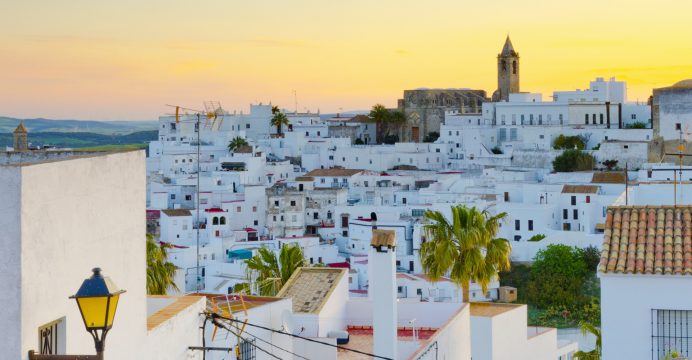 Dazzling clusters of cube-shaped houses perched on top of Andalusia’s olive tree-studded mountains, the “Pueblos Blancos”, or white villages, of southern Spain are named for the lime wash the buildings are painted with to keep the interiors cool.

The labyrinths of narrow alleyways are a throwback to when this region was known as Al-Andalus and was part of a medieval Muslim territory. Many of their names have Arabic origins, like Alcala, meaning ‘castle’.

Another hint at their ancient past is the frequent suffix ‘de la Frontera’ or ‘of the Frontier’, harking back to when Spain was split into Christian and Muslim territories, reports Reuters.

Local festivals range from religious processions, where men haul statues adorned with flowers along the stone streets, to bull runs, where bulls are released in the village and participants duck behind bars to escape their horns.

While this region is stunningly beautiful and a big draw to tourists visiting the south of Spain, it is also one of the poorest areas in the country and has one of the highest unemployment rates in the European Union.

Andalusia was the European region with the second highest unemployment rate in 2015, according to Eurostat, with nearly one in three without work. More than half of young people are unemployed.

Traditionally people here have lived from the olive oil industry – Spain is by far the biggest global producer of olive oil – but expectations change, and young people are not keen on the long hours and poor pay of farm work.

“Young people escape to the cities,” says 19-year-old Jose Maria Cortijo, who lives in Vega de los Molinos, part of Arcos de la Frontera, a white village balanced on a ridge which plunges down to the valley below.

Agustin Pina, a cheese maker in nearby village Villaluenga del Rosario which nestles in the middle of the Sierra de Grazalema national park, agrees.

“Young people don’t want to work in the fields, because it’s a life of slavery,” says the 58-year-old who has worked all his life on the land. “They want to work Monday to Friday.”

A throwback to an earlier time, life in the village is quiet and calm, residents say.