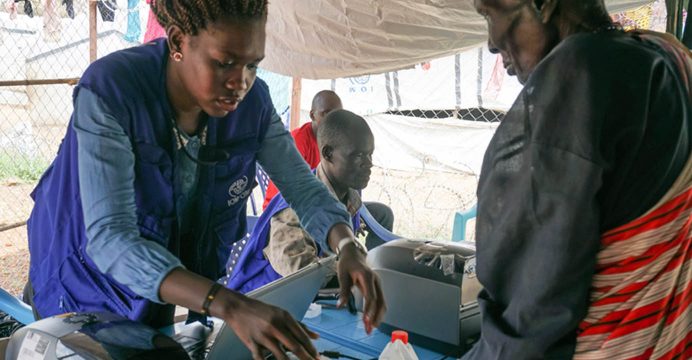 Over 38,800 internally displaced persons (IDPs) are sheltering at the UN protection of civilian (PoC) sites in Juba, the capital of South Sudan, according to a recently completed biometric registration exercise.

While the majority of these IDPs have been sheltering at the UN base, known as UN House, since the crisis erupted in December 2013, approximately 10,000 arrived following the four-day resurgence of violence in Juba this July.

To obtain updated and accurate information on the IDP population in Juba, IOM led a biometric population registration at the UN House PoC sites from 10 September to 7 October, in coordination with humanitarian partners. The registration covered both PoC sites 1 and 3, registering 8,251 IDPs and 30,623 IDPs at each site, respectively.

IDPs are living at UN House for protection from the brutal civil war that has engulfed the country and forced millions to put their lives on hold. On the last day of biometric registration, Jacqueline, a 20-year old who fled the violence in July, said “I feel safe here, but I worry about the future, for not only me but all the young children who are growing up in these sites.”

The new biometric registration data indicates that the population size has increased by at least 10,000 people, including those relocated from the UN Mission in South Sudan (UNMISS) Tongping base in August and September, since the last biometric registration exercises were conducted in January and June of 2015.

The biometric registration process entails obtaining fingerprints of all household members, or photographs in the case of small children, to provide a detailed population count and profile. Collecting biometric data helps reduce duplication in population figures, provides baseline information that humanitarian actors can use for response planning and improves IDPs’ access to services.

Partners helped mobilize the population, ensured the most vulnerable individuals were not missed and assisted with logistics and crowd control.

More than 1.61 million people are internally displaced across South Sudan, including approximately 200,000 sheltering at UN PoC sites in Juba, Bentiu, Bor, Malakal, Melut and Wau. Humanitarian agencies in South Sudan are engaged in a large-scale humanitarian operation that aims to reach more than 5 million people in need of assistance this year.