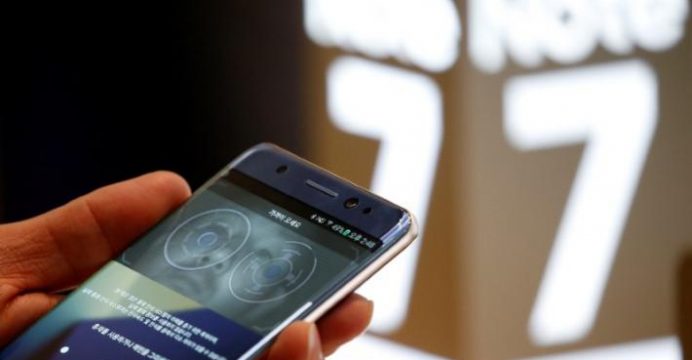 Production of Samsung Galaxy Note 7 suspended after reports of fire

Samsung Electronics Co Ltd has suspended production of its flagship Galaxy Note 7 smartphones, a source said on Monday, after reports of fires in replacement devices added to the tech giant’s worst ever recall crisis.

Top U.S. and Australian carriers also suspended sales or exchanges of Note 7s, while major airlines reiterated bans on passengers using the phones, after smoke from a replacement device forced the evacuation of a passenger plane in the United States last week, reports Reuters.

Fires in phones that were meant to replace devices that had been recalled because of their propensity to explode would be a disaster for the world’s largest smartphone maker, suggesting it had failed to fix a problem that has already hurt its brand and threatens to derail a recovery in its mobile business. 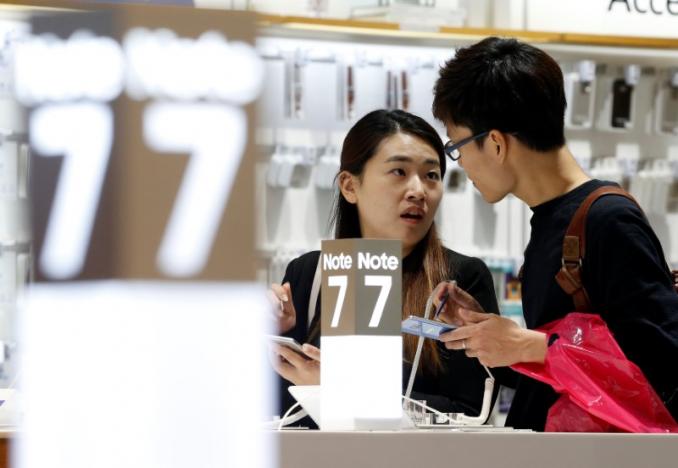 A couple tries out Samsung Electronics’ Galaxy Note 7 at the company’s headquarters in Seoul, South Korea

“If the Note 7 is allowed to continue it could lead to the single greatest act of brand self-destruction in the history of modern technology,” said Eric Schiffer, brand strategy expert and chairman of Reputation Management Consultants.

“Samsung needs to take a giant write-down and cast the Note 7 to the engineering hall of shame next to the Ford Pinto.”

In a regulatory filing, Samsung said it was “adjusting” shipments of Note 7s to allow for inspections and stronger quality control due to some devices catching fire.

It did not comment on the production halt or the cause of the fires, while the source – who declined to be identified because they were not authorized to speak to the media – did not explain whether specific problems had been identified or when production was halted.

A Samsung official told Reuters earlier on Monday it was investigating reports of “heat damage issues” and would take immediate action to fix any problems in line with measures approved by the U.S. Consumer Product Safety Commission.

On Sept. 2, Samsung announced a global recall of 2.5 million Note 7s due to faulty batteries which caused some of the phones to catch fire.

It ordered new batteries from another supplier and started shipping replacements to customers just two weeks later. But similar problems arose with a replacement Note 7 on Oct. 5, which began smoking inside a Southwest Airline flight in the United States.

Samsung shares, which have rebounded after an initial sell-off on the recall, closed down 1.5 percent, compared with a 0.2 percent rise for the broader market.

“I think the cleanest thing to do is to give up on the Note 7,” said HDC Asset Management fund manager Park Jung-hoon, whose fund owns Samsung shares.

“What’s scary is that this is causing people to repeatedly doubt Samsung’s fundamental capabilities, so it’s important for Samsung to get past this issue quickly.”

Samsung’s recall crisis has coincided with pressure from one of the world’s most aggressive hedge funds, Elliott Management, to split the company and pay out $27 billion in a special dividend.

Major airlines, air regulators, and airport authorities reiterated bans on passengers using the phones, saying Note 7s should not be powered up or charged on board.

A South Korean government agency said it was monitoring reports of the fires and warned that the recalled Note 7 devices should not be used or charged inside airplanes.

Mobile carriers also took action. Verizon Communications Inc , the No.1 U.S. wireless carrier, said on Monday it would suspend the exchange of replacement Note 7s, and would allow customers to exchange the replacement for another smartphone.

AT&T Inc, the No.2 U.S. wireless carrier, said earlier that it would stop issuing replacement Note 7s and would let customers with a recalled Note 7 exchange that device for another Samsung smartphone or other smartphone of their choice.

No.3 wireless carrier T-Mobile US Inc also said it was temporarily halting sales of new Note 7s as well as exchanges while Samsung investigated “multiple reports of issues” with its flagship device. T-Mobile offered customers who brought in their Note 7s a $25 credit on their phone bill.