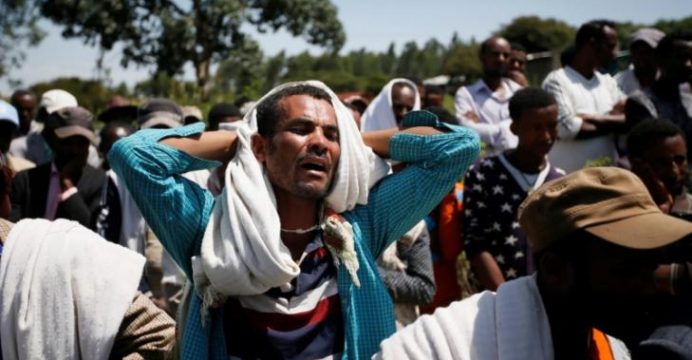 Protests broke out in Ethiopia after people killed in a stampede﻿

Protests broke out in some areas of Ethiopia’s Oromiya region on Monday, a day after dozens of people were killed in a stampede at a religious festival sparked by a bid by police to quell demonstrations, witnesses said.

Opposition politicians and government officials gave contrasting tolls of casualties that took place during the annual Irreecha festival in the town of Bishoftu, some 40 km (25 miles) south of the capital Addis Ababa, where police fired teargas and shots in the air to disperse protesters, reports Reuters.

The manager of the town’s government-operated referral hospital said the death toll had risen to 55, with 100 injured, from 52 dead on Sunday. An opposition leader told Reuters the number of dead stood at around 150. 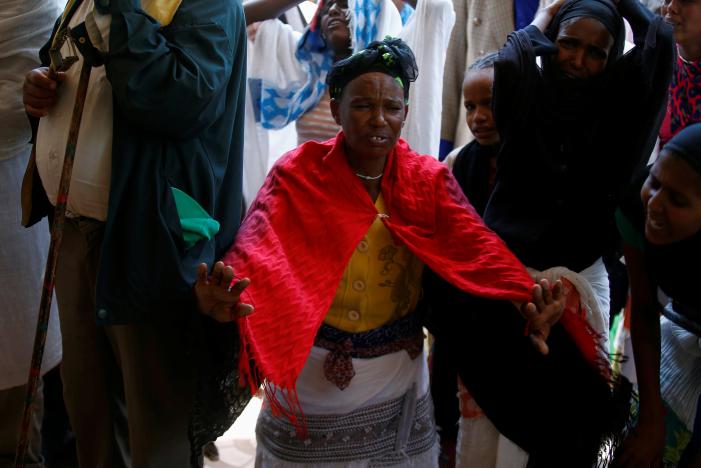 A woman mourns during the funeral of Tesfu Tadese Biru, 32, a construction engineer who died during a stampede after police fired warning shots at an anti-government protest in Bishoftu during Irreecha, the thanksgiving festival of the Oromo people, in Denkaka Kebele, Ethiopia

On Monday, witnesses said crowds took to the streets in Oromiya’s Ambo, Guder, Bule Hora and other towns in response to the deaths.

“Shots are still being fired. Everything remains shut – Ambo has been brought to a standstill,” said Mesfin, a university student who did not want to give his full name out of fear of reprisal.

Two other residents of the other towns said scuffles took place between demonstrators and police. The region’s assistant police chief told journalists that “widespread disturbances” had taken place in several parts of the region.

“Roads have been blocked, while government offices and vehicles have been burnt down. Police are trying to put an end to all this,” said Sorri Dinka, deputy commissioner of the Oromiya Police Commission.

The Horn of Africa country has declared three days of national mourning, with flags flying at half mast throughout the country to pay tribute to the victims.

Sporadic protests have erupted in Oromiya over the last two years, initially triggered by a land row but increasingly turning more broadly against the government. Scores of protesters have been killed in clashes with police since late last year.

The developments highlight tensions in the country where the government has delivered high economic growth rates but faces criticism from opponents and rights groups that it has reduced political freedoms.

The government blames rebel groups and dissidents abroad for stirring up the protests and provoking violence. It dismisses charges that it clamps down on free speech or on its opponents.

Merera Gudina, chairman of the opposition Oromo Federalist Congress, said Sunday’s death toll had climbed to 150 people and that some of the victims were shot dead by police, contrary to official claims.