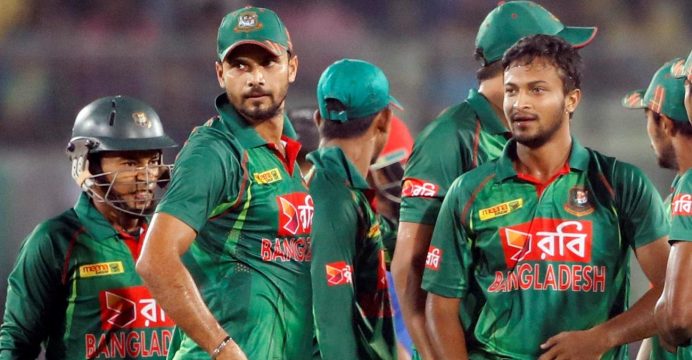 Bangladesh have finally got their previous rhythm back as the Tigers registered their 100th ODI win in style riding on Tamim Iqbal’s seventh ODI hundred to beat Afghanistan by a convincing 141 runs to clinch the three match series 2-1 at the Sher-e-Bangla National stadium on Saturday.

The series-deciding third ODI turned out to be a no-contest, which Bangladesh won by 141 runs to clinch the series. The match was virtually sealed in the 23rd over of Afghanistan’s 280 chase, when Samiullah Shenwari was dismissed. They were eventually bowled out for 138 in 34th over to cap off a spin capitulation, led by comeback man Mosharraf Hossain, who picked up three wickets. It also happened to be their 100th ODI win.

That Bangladesh could build scoreboard pressure on Afghanistan was largely due to Tamim Iqbal’s seventh ODI century that helped ride a middle-order implosion. Sabbir Rahman, who made 65, complemented Tamim in a 140-run second-wicket stand and Mahmudullah provided the late impetus with a cameo 32 that left Afghanistan having to achieve their highest-successful chase to win the series.

Any chance of this being a close finish hinged on Mohammad Shahzad, the wicketkeeper batsman. But Afghaistan’s chase hit a road block as soon as he was snuffed out for a duck by Mashrafe Mortaza, in the third over. A 47-run second-wicket stand between Nowroz Mangal and Rahmat Shah, albeit slowly, helped them put up a fight all too briefly before Bangladesh’s experience and superiority prevailed.

Afghanistan didn’t help their cause by fielding the way they did. Things started badly when Asghar Stanikzai, the captain, but down a sitter to reprieve Tamim on 1. Overthrows, misfields and run-out opportunities were a regular feature thereon as Tamim and Sabbir dug in to build the innings after the early loss of Soumya Sarkar.

Tamim started the counter-attack when he hit medium pacer Mirwais Ashraf for three boundaries in the eighth over. Sabbir, initially slow to begin with, perhaps because he was batting at No. 3 for the first time in ODIs, shifted gears when he imperiously pulled Dawlat Zadran for six over deep square leg. Tamim, throughout his innings, kept hitting the rank bad balls to the boundary to push Afghanistan on the defensive until Sabbir’s ungainly heave broke the century stand.

Tamim carried on after the wicket and brought up his century but tiredness and cramps seemed to get the better of him in the 39th over, when he holed out to long-off. Bangladesh were 215 for 3 with 10 overs left, but imploded quite sensationally. Shakib Al Hasan’s uncomfortable 35-ball 17 ended when he guided an away-going delivery from Zadran to wicketkeeper Shahzad in the 43rd over. Mushfiqur fell to a beauty from Rashid off the first ball of the next over. Then, the Afghanistan legspinner got one to dip and beat a tentative Mosaddek outside off as Shahzad completed a regulation stumping.

Bangladesh, who had just made 24 runs between the 41st and 45th overs, slowed down further when Mosharraf kept missing slogs in his 14-ball innings. He holed out at long-on in the 48th over, after which Mahmudullah struck three fours in quick succession to give Bangladesh the lift they were looking for.

With momentum on their side, Mashrafe gave Shahzad a good workover before scything through his forward prod off the first ball of his second over, before falling on his ankle to briefly give the team management the shivers.

Nawroz Mangal, solid in defense and fluid in his stroke play, sparkled briefly before being consumed by Mosharraf’s guile when he was lbw trying to sweep a fuller delivery. The left-arm spinner followed it up with Hashmatullah Shahidi’s wicket in the same over after the left-hander top edged a sweep to Tamim at short fine leg. Afghanistan slipped to 55 for 4 in the 17th over when Shakib threw down the stumps at the non-striker’s end to send back Stanikzai.

With little or no pressure to contend with, Mashrafe introduced Taskin Ahmed, and he responded. Bowling with genuine pace, he kept the batsmen on their toes with some rip roaring bouncers that softened up Shenwari, who was caught down the leg side while attempting a pull. At 88 for 6, the chase was all but over. Nabi became Mosharraf’s third wicket when chipped a simple return catch.

Najibullah Zadran then struck four sixes in his 19-ball 26 to briefly delay the inevitable. The match was sealed with Shafiul Islam accepting a simple caught-and-bowled chance to complete the capitulation.