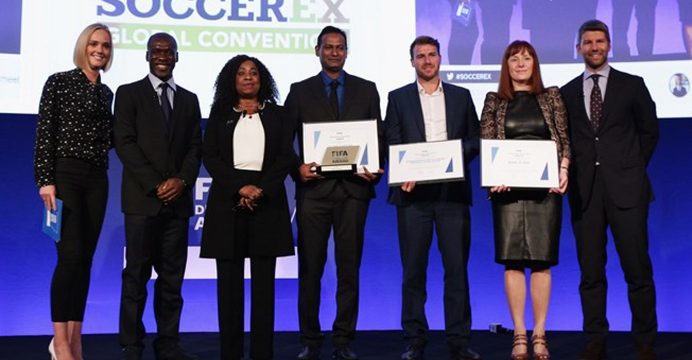 Indian NGO Slum Soccer has won the inaugural FIFA Diversity Award today. The award was created by FIFA to recognise outstanding organisations, group initiatives and football personalities that are standing up for diversity and inspire unity, solidarity and equality among all people. Slum Soccer uses football to connect individuals, teach life skills and work towards improving the living conditions of women and marginalised populations in Indian society.

The other two finalists were the International Gay & Lesbian Football Association (IGLFA), which promotes and fosters the worldwide growth of football for lesbians, gays, bisexuals and transsexuals (LGBT) while also strengthening the self-respect of the global LGBT community, and Kick It Out, of England, an organisation which enables, facilitates and works with football authorities, professional clubs, players, fans and communities to tackle all forms of discrimination.

The award was presented by FIFA Secretary General Fatma Samoura alongside former Dutch international Clarence Seedorf and former German international Thomas Hitzlsperger, members of the jury for the FIFA Diversity Award. The 11 members of the jury, including former football professionals and experts, have a wealth of global experience in various areas of diversity and anti-discrimination, whether related to ethnic, national or social origin, gender, disability, language, religion, political opinion, sexual orientation or any other form of discrimination.

The ceremony, which was held at the Soccerex Global Convention in Manchester, UK, and was hosted by CNN anchor Amanda Davies, provided the occasion for a lively discussion on diversity in sport.

The FIFA Diversity Award is part of FIFA’s overall strategy to reinforce its fight against discrimination and promote diversity in football. Last year, FIFA published a good practice guide for its member associations and introduced a new monitoring system for discriminatory incidents for all preliminary matches of the 2018 FIFA World Cup.

You can find more information on the FIFA Diversity Award here. A comprehensive document listing FIFA’s work in the field of diversity and anti-discrimination is also available here.