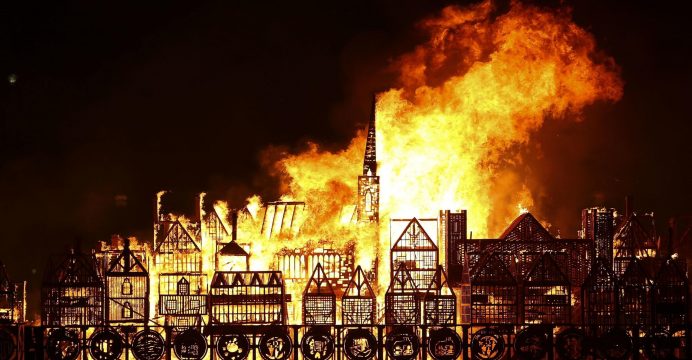 Flames once again licked the historic buildings of Britain’s capital as a wooden replica of 17th century London went up in smoke to mark the 350th anniversary of the Great Fire of London.

The Great Fire began at a baker’s shop in Pudding Lane in the early hours of Sept. 2, 1666, and spread rapidly through the wooden structures of the old city, reports Reuters.

It raged for four days, ravaging the parts of the city inside the old Roman wall, but surprisingly, only six deaths were reported.

The old, medieval St Paul’s Cathedral was completely destroyed by the fire, and then rebuilt in its present form following the designs of architect Christopher Wren.

The wooden replica was designed by American artist David Best and built by unemployed young Londoners over several months.

The spectacle marked the end of “London’s Burning”, a four-day festival of free art events to mark the anniversary.