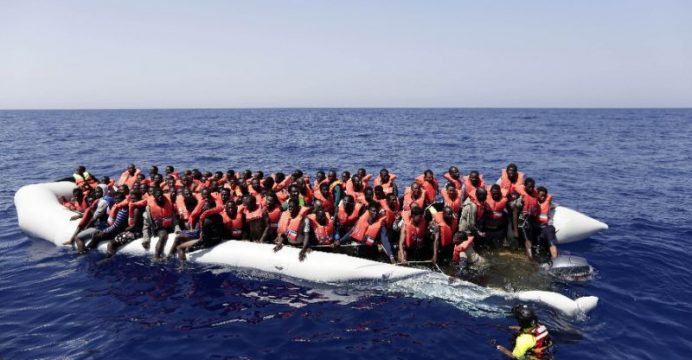 Around 6,500 migrants rescued off the coast of Libya

Around 6,500 migrants were rescued off the coast of Libya on Monday, the Italian coastguard said, in one of its busiest days of life-saving in recent years, reports BSS.

Dramatic images of one operation showed about 700 migrants crammed onto a fishing boat, with some of them jumping off the vessel in life jackets and swimming towards rescuers.

A five-day-old baby was among those rescued along with other infants and was airlifted to an Italian hospital, according to Doctors Without Borders (MSF), which took part in operations.

“We’ve been particularly busy today,” a spokesman for the Italian coastguard told reporters.

A member of the Libyan coast guard conducts a daily routine check on one of the patrol boats in Tripoli, Libya

On Sunday more than 1,100 migrants were rescued in the same area. The total number of arrivals in Italy this year now stands at 112,500, according to the UN’s refugee agency and the coastguard, slightly below the 116,000 recorded by the same point in 2015.

Almost all of those migrants originate from West Africa and the Horn of Africa, often departing from Libya en masse when the sea is calm and a southern wind can push boats up into international waters.

Such days often come one after another, leading to large numbers of boats over a short period. More than 13,000 people were rescued in under a week at the end of May, and 8,300 more at the start of August.

The Italian coastguard predicted that weather conditions would encourage the departure of further migrant boats Tuesday.

The vessels are often flimsy and overcrowded while some of the migrants set off in such poor health that even if the crossing is calm they cannot survive a day at sea.

There are around a dozen vessels run by humanitarian groups that patrol the waters off the Libyan coast, but tensions in the zone have flared recently as rival factions battle to control migrant trafficking.

This month an MSF ship taking part in migrant rescue operations came under attack from armed men who shot at the vessel before briefly climbing aboard, the medical charity said. Nobody was hurt in the incident, which took place on August 17, the group said.

More than 3,000 migrants have died at sea while trying to reach either Greece or Italy since the start of this year, an increase of some 50 percent on the same period in 2015.

Some 204,000 others crossed the Mediterranean to Europe in the first six months of this year, the UN refugee agency said, as the continent battles its worst migration crisis since World War II.

Last year more than one million migrants made the journey to Europe, with the majority fleeing war in Syria and the Middle East.