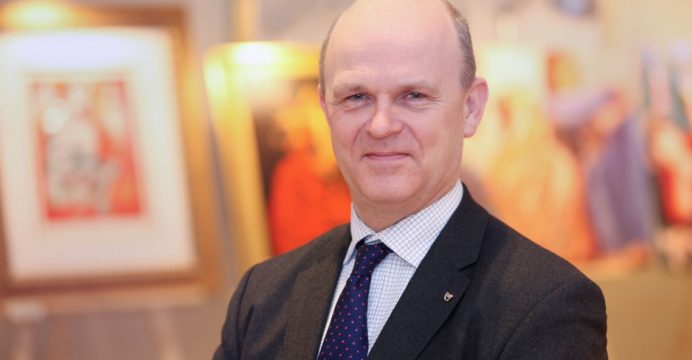 Four months after taking the helm of struggling Russian automobile giant Avtovaz, Renault executive Nicolas Maure has set his sights on returning the Lada maker to profit by 2018.

Maure, who headed Romanian carmaker Dacia for just over two years before taking on his new position, took over Avtovaz, which is majority-owned by the Renault-Nissan Alliance, in April amid major losses in the Russian auto industry struggling with recession.

That year the Russian car market slumped 36 percent amid international sanctions over Ukraine and the crash in oil prices took its toll on the economy.

“I arrived at a trying time,” Maure, 56, told reporters this week on the sidelines of the Moscow International Automobile Salon.

“The market was slumping and I was arriving in a troubled company.”

Maure’s predecessor, Swedish executive Bo Andersson, had been on a drive to improve efficiency at Avtovaz’s Soviet-era facilities and slashed thousands of jobs from the bloated workforce in 2014.

But the measures did not yield any significant financial success, and the company made a loss of 620 million euros ($680 million) on the French carmaker’s accounts last year.

But an uptick in sales, which grew 4 percent last month in comparison to the same period last year, and its growing market share has made Maure upbeat about Avtovaz’s prospects.

“The situation is more favourable than when I arrived, with steady demand,” he said.

“We are doing everything necessary to be in profit from 2018.”

Despite Maure’s optimism about the future, Renault is still set to recapitalise Avtovaz by the end of the year. The Lada maker suffered losses of 27 billion rubles ($416 million) in the first half of 2016.

When the Renault announced plans for recapitalization earlier this year, Avtovaz said it would further “optimise the workforce” as part of its “anti-crisis plan” to improve finances in 2016, having already switched all of its employees and management to a four-day week from February to August.

Maure said that in light of high demand for the Lada Vesta — 30,000 of which have been sold in Russia since the beginning of the year — the company would further study the market and could cancel its four-day work week at its factory in the city of Togliatti on the Volga River some 800 kilometres east of Moscow.

Despite signs of the Russian economy stabilising, the Association of European Businesses predicts that auto sales will drop more than 10 percent this year, a figure up from the five percent drop that had been previously predicted.

“We are working with a scenario of a weak market in 2017,” Maure said.

“We have to keep fighting for our share of the market (and) increase our profitability as we develop our exports, which fell to a historical low in the first quarter.”

Maure said Avtovaz is now seeking foreign markets in the Middle East and Africa. The company has lost the Ukrainian market as tensions linger between Moscow and Kiev over Russia’s annexation of Crimea in March 2014 and its support of a pro-Russian insurgency in eastern Ukraine. Maure said that the corporate culture at the company has changed since he took charge.

“The atmosphere was tense from a managerial, social and political standpoint,” he said.

“The first months consisted of calming things down, to make people gain confidence again, to tell them that Avtovaz has a future.”