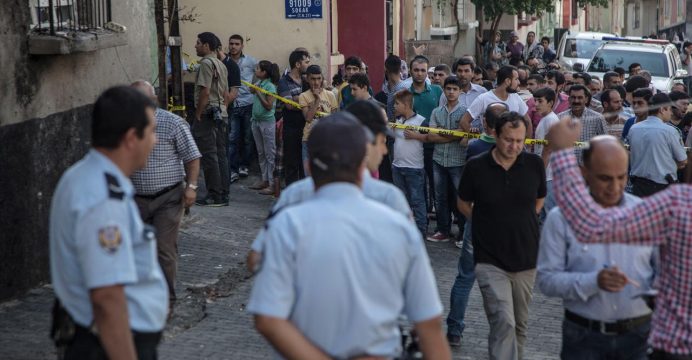 30 killed at a wedding in Turkey by likely IS attack

Turkish President Recep Tayyip Erdogan on Sunday said the Islamic State (IS) jihadist group was the “likely perpetrator” of a bomb attack on a wedding in the city of Gaziantep near the Syrian border that left at least 30 dead and dozens more wounded, reports BSS.

The explosion — which officials said could have been triggered by a suicide bomber — was the latest attack to have rocked the key NATO member in a horrific year that has seen strikes blamed on Kurdish and Islamist militants as well as a bloody July 15 botched coup. 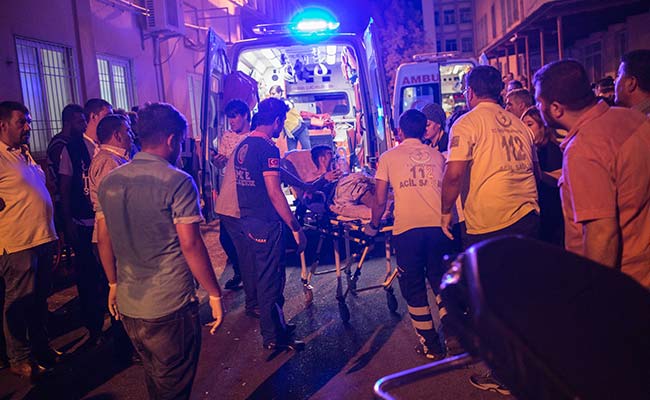 Erdogan said, the Islamic State (IS) jihadist group was the “likely perpetrator” of a bomb attack on a wedding

Gaziantep governor Ali Yerlikaya said in a statement that 30 people had been killed and 94 wounded in “an abhorrent terror bomb attack on a wedding” late on Saturday night.

Erdogan said in a statement that there was “no difference” between the group of US-based preacher Fethullah Gulen who he blames for a failed July 15 coup bid, the outlawed Kurdistan Workers Party (PKK) “and Daesh (IS), the likely perpetrator of the attack in Gaziantep”.

“Our country and our nation have again only one message to those who attack us — you will not succeed!” he said.

The explosion took place in the Sahinbey district of the city which is said to have a large number of Kurdish residents, fuelling speculation of jihadist involvement. Reports said the wedding had a strong Kurdish presence.

The pro-Kurdish Peoples’ Democratic Party (HDP) said its members had been present at the wedding which was also attended by many women and children.

Erdogan said that the aim of attacks like Gaziantep was to sow division between different groups in Turkey such as Arabs, Kurds and Turkmen and “spread incitement along ethnic and religious lines.”

Many jihadists see Kurds as one of their main enemies, with Kurdish militias playing a significant role in the fight against IS on the ground in Syria.

Prime Minister Binali Yildirim said Gaziantep would show the same spirit of its defeat in 1921 of French forces in Turkey’s Independence War which led to the word Gazi (war hero) being added to its original name of Antep. “Our grief is great but be sure our unity and togetherness will defeat all these diabolic attacks,” he said. – ‘Likely suicide attack’ –

Mehmet Erdogan, a ruling Justice and Development Party (AKP) lawmaker for Gaziantep said it was not clear who was responsible for the explosion but there was a “high possibility” it was a suicide attack.

“The aim of terror is to scare the people but we will not allow this,” said Deputy Prime Minister Mehmet Simsek, who also represents Gaziantep in the Turkish parliament, adding that a suicide bombing was the likely cause.

A major city lying just 60 kilometres (37 miles) north of the Syrian border, Gaziantep has become a hub for Syrians fleeing the civil war in their country.

But as well as refugees and opposition activists, there have long been fears it was home to a significant jihadist presence.

Images from the scene showed bodies covered in white sheets while distraught relatives of the victims were comforted in the street.

Kurdish militants had this year already twice struck in Ankara in deadly attacks, while IS suicide bombers have twice killed tourists in the centre of Istanbul.

Meanwhile, the country is still reeling from a failed July 15 coup blamed on Gulen that has been followed by a relentless purge of his supporters from all state institutions.

Twelve people were killed on Thursday in a spate of bombings against Turkish security forces blamed on the PKK who appear to have ramped up their campaign of attacks in the aftermath of the failed coup.

Erdogan said in his statement that PKK attacks on security forces had claimed 70 lives in the last month alone. As has been the case in previous attacks, Turkey’s broadcasting regulator RTUK banned broadcast of footage from the scene of the attack in Gaziantep.

The blast in Gaziantep came on the day Yildirim vowed Ankara would play a “more active” role in the next six months in efforts to solve the over five-year Syrian civil war.

In a sign that Turkey’s position was becoming gradually more aligned with Russia and Iran, he added that Syrian President Bashar al-Assad could remain temporarily during a transition period.

Iran and Russia are the main allies of Assad whereas Turkey has always insisted his exit was a precondition for the end of the conflict. Turkey was long accused of turning a blind eye to or even abetting the rise of IS in Syria, claims it vehemently denies.

However, Western states say Ankara has begun to move strongly against the group and seal its borders to jihadist traffic after the attacks blamed on IS on its soil this year.