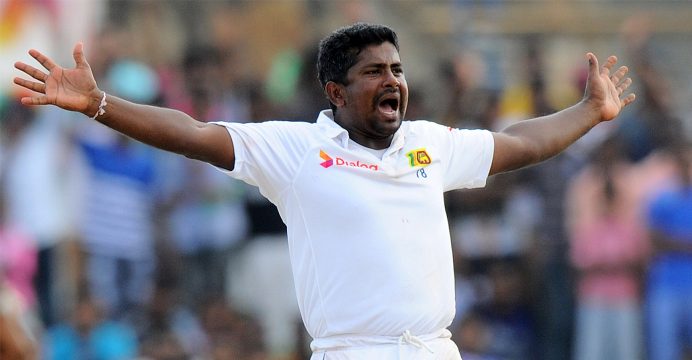 Sri Lanka left-arm spinner Rangana Herath has returned to the top five of the MRF Tyres ICC Player Rankings for Test Bowlers after registering his seventh 10-wicket haul which helped Sri Lanka to win the third Test by 163 runs and the series 3-0.

Herath, 38, recorded figures of six for 81 and seven for 64 in the Colombo Test, which has helped him to move three places up to fifth in the latest rankings which were released on Thursday morning.

This is Herath’s highest-ranking since he achieved fourth spot following the Wellington Test against New Zealand in January 2015.

The bowlers’ list is headed by England’s James Anderson, who leads India spinner Ravichandran Ashwin by 12 points. Dale Steyn, who will feature in the upcoming series against New Zealand, is third, 17 points behind the India off-spinner.

Chandimal has risen six slots to reach 17th spot in a list which is headed by Australia captain Steve Smith, while de Silva has shot up 30 places to 37th position. Kaushal Silva, who scored 115 in the second innings, has also moved up nine places to 39th on the rankings.

For Australia, opener David Warner has gained one place to share ninth spot with New Zealand’s Ross Tyalor, while Shaun Marsh, who struck the first century for Australia on the Sri Lanka tour in Colombo, has jumped 13 places to reach 33rd rank.

Smith, who scored 119 runs in the first innings, has retained his number-one ranking. He leads England’s Joe Root by 28 points, with Kane Williamson aiming to move into second position when he takes the field against South Africa in Durban as he trails the England batsman by just five points.

Meanwhile, South Africa has its task cut out in the upcoming two-Test series against New Zealand starting on Friday, which it needs to win by any margin to overtake the opposition and move up two slots in the MRF Tyres ICC Test Team Rankings.

South Africa, which has never lost a Test series to New Zealand, currently has 92 points and is placed seventh in the list led by newly-crowned India while New Zealand is fifth with 99 points. Sri Lanka, which completed a 3-0 whitewash over Australia in a home series on Wednesday, is in sixth position at 95 points.

On the other hand, a 2-0 win for New Zealand will carry it to 103 points and a 1-0 win to 102 points, but neither will be enough to take it above fifth rank. South Africa will remain on seventh position in either scenario with a tally of 86 and 88 points, respectively. Even a 1-1 draw will keep New Zealand in fifth position with 98 points and South Africa at its current 92 points.