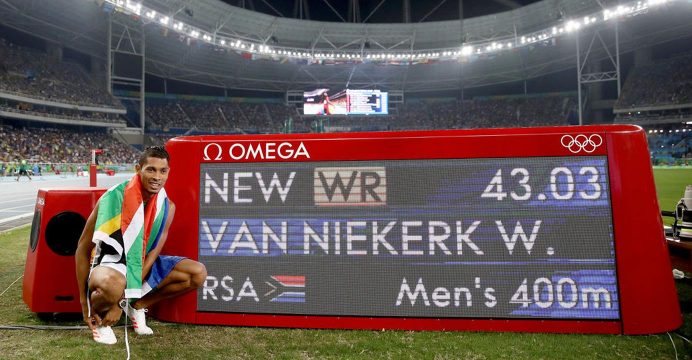 Nobody was going to steal the show from Usain Bbolt’s 100m title defense on day nine of Rio 2016 but wayde van niekerk’s remarkable record-breaking triumph in the men’s 400m came close and suggested that, in the 24-year-old south African, athletics has a new superstar in the making.

Not only did van Niekerk smash Michael Johnson’s 17-year-old world record, posting a new mark of 43.03 seconds and relegating the previous two Olympic 400m champions, Kirani James and LaShawn Merit to silver and bronze, he did so running from the unfavoured lane eight.

Shortly after the South African crossed the finish line, Usain Bolt made a point of taking time out from his 100m final preparations to rush over to congratulate him.

“When he got the world record I was like, wow!” said Bolt, who has spent time training with the South African in Jamaica this year. “I told him in Jamaica ‘my coach said you’re probably the only guy right now other than me who can break this 400m world record’. I’m really happy for him, I’m really proud of him.”