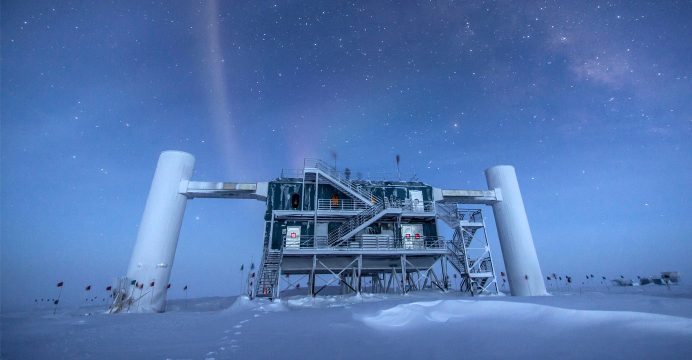 An exhaustive search for a ghostly subatomic particle called the sterile neutrino has come up empty, weakening the case for its existence.

Scientists from MIT and the University of Wisconsin at Madison, along with 40 other institutions, report today in Physical Review Letters that after analyzing 20,000 neutrinos detected over the span of a year at the IceCube Neutrino Observatory at the South Pole, they were unable to observe any sign of sterile, or “hidden,” neutrinos.

Sterile neutrinos are hypothetical particles that may behave in ways that cannot be explained by the standard rules of physics. They are thought to have no interactions and thus to be completely “sterile” to physical matter — a quality that allows these particles to stream uninhibited and undetected through the universe. If they exist, scientists believe sterile neutrinos may be at the root of a number of cosmological mysteries, including dark matter, which makes up roughly one-third of the matter in the universe but somehow does not emit or reflect light.
While there have been hints of sterile neutrinos in recent years, scientists have yet to detect these particles directly, as they are incredibly elusive and are thought to interact only with gravity. Scientists hypothesize that sterile neutrinos should manifest themselves through the interactions of ordinary neutrinos — the second-most abundant particle in the universe, next to photons, that stream through every cell in our bodies, by the billions, without any effect. 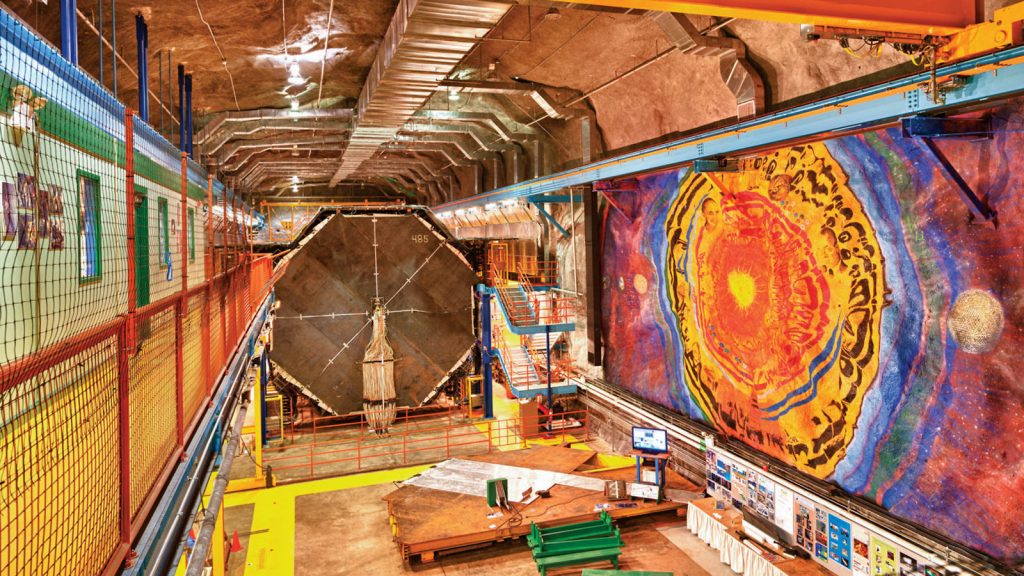 Scientists looked for such telltale dips using the IceCube Neutrino Observatory, a huge, cubic-kilometer particle detector buried deep under the ice at the South Pole. The detector consists of more than 5,000 light sensors, suspended from 86 strings that stretch down through the ice to the Antarctic floor, 2,450 meters deep — about the vertical distance of five Empire State Buildings.

While neutrinos cannot be observed directly, when they pass through ice, they produce electrically charged secondary particles that in turn emit light. Scientists can analyze the way in which IceCube’s sensors pick up this light, to determine the number of neutrinos and the angle at which they are passing through.

As they report in the new paper, the scientists — including MIT professor of physics Janet Conrad, a researcher in the Lab for Nuclear Science; postdoc Carlos Argüelles; graduate student Gabriel Collin; and former graduate student Ben Jones — collected and analyzed data over an entire year. Throughout 2011, the team detected 20,000 neutrinos.
“Every time IceCube sees one neutrino, there are a million other things next to it,” says Argüelles, who with the MIT team helped to process the data and develop the neutrino analysis. “We have to disentangle the one neutrino from all of this, and of those, we have to have a very good cleaning process to make certain they are real neutrinos. So it’s a very difficult thing.”

Once the researchers identified the neutrinos amid the noise, they counted them up, then organized them according to the energies at which they were detected. They then compared their results with a model that they developed, which predicts the number and energy of neutrinos they should see in the absence of sterile neutrinos. As it turns out, the neutrinos they did detect were an almost perfect match with their predictions, with no dips in the data that would indicate sterile neutrinos in the mix.

“We had a very good chance of seeing these particles, but they just weren’t there,” Collin says. “It’s made the case for sterile neutrinos weaker.”

This doesn’t necessarily mean the hypothesis of a fourth neutrino — and a completely new fundamental particle — is completely dead. The researchers compared their neutrino observations with theoretical predictions made by other scientists. From their observations, the team was able to rule out a number of possible scenarios that they determined, with 99 percent confidence, to be impossible. That is, if sterile neutrinos exist, they should not have the mass, energy, and other parameters that are proposed in these scenarios. However, the researchers were unable to exclude a small number of other predictions, based on their observations.

“We have identified where sterile neutrinos should not be, and we signaled a space where they can still survive,” Argüelles says. “We have five years more of data to analyze, which means we can do a better job in looking for this particle, and we are working hard on that.”

This research was funded, in part, by the National Science Foundation.