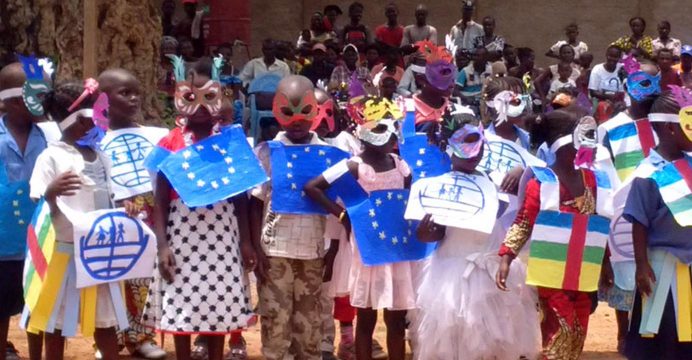 IOM Central African Republic (CAR), with its local authority counterparts, handed over a newly rehabilitated youth centre in Castor in Bangui’s 3rd district to the community on Wednesday, 3 August.

The rehabilitation of the youth centre is one of over 60 infrastructure projects currently ongoing as part of a European Union (EU)-funded effort to increase access to social services in conflict-affected communities throughout the country.

Infrastructure projects for rehabilitation are chosen through a series of community consultations and are carried out by youth of the communities through vocational training schemes.

The youth centre in Castor has particular symbolic value as it is located in Bangui’s 3rd district, which also hosts PK5 – a so-called Muslim enclave.

The centre was rehabilitated by youth, elderly and handicapped people, after the project was chosen by the community in August 2014. Due to a series of security-related events, the rehabilitation process had to be repeatedly interrupted.

Overall, over 150 young people participated in vocational training and 500 community members supported the rehabilitation through cash for work schemes.

The opening ceremony this week was attended by community leaders not only from the 3rd, but also the 5th and 6th districts, as well as national authorities and youth leaders from across the city.

“The reopening of the youth centres both in the 3rd and soon also in the 5th district, are extremely important for our communities. Our youth are often unemployed and have dropped out of school – if they ever went – a long time ago. Criminal activities are on the rise and youth have nothing useful to do. Having a space in which trainings can be held, equipped with libraries and sports facilities will give them a meaningful way to pass their time without resorting to illegal or violent actions,” said 5th district Mayor Alain Yemo.

The Castor youth centre is one of over 40 infrastructure projects in Bangui completed as part of IOM’s EU-funded community stabilization project. The project aims to support peaceful co-existence, the revitalization of local markets and better access to social services. To date over 350,000 people have directly participated in the project since March 2014.