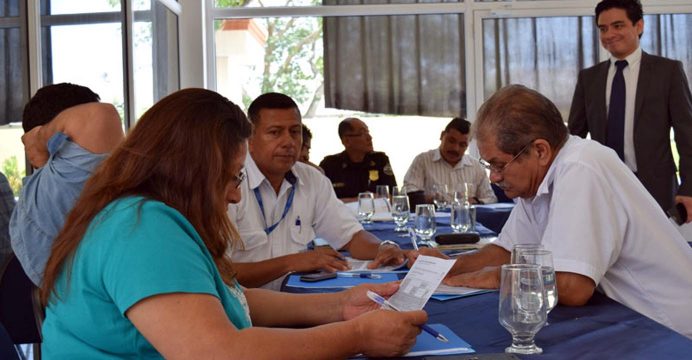 IOM has launched a USAID-funded project: Northern Triangle Migration Management Information Initiative (NTMI), designed to strengthen the capacities of governments of El Salvador, Guatemala and Honduras to collect, analyse and share information on human mobility, in order to support humanitarian action and protect vulnerable populations in the three countries.

“With this project we aim to strengthen the capacities of governments and civil society to collect statistics. But we will also providing tools based on transparent, verifiable and reliable information to support decisions, actions and plans in the future,” said IOM’s Chief of Mission in El Salvador, Guatemala and Honduras, Jorge Peraza Breedy.

“IOM helps governments to monitor human mobility and to develop strategies to assist returning migrants, with an emphasis on children and adolescents,” he added, speaking at the launch of the project in El Salvador.

The NTMI comprises four main lines of work: strengthening government capacity to record, process, analyse and communicate returnee information; generating consistent information on human mobility and how it relates to decision-making and public policy development; creating and sharing reports and information products with government and other agencies involved in assisting returnees and other vulnerable populations, with an emphasis on children and adolescents; and promoting cooperation between government agencies.

The project also includes the development of a Displacement Tracking Matrix (DTM) to inform governments about the key needs of mobile populations. The DTM will generate timely and accurate information on vulnerability and access to basic services.

IOM is also implementing a National Survey on Remittances and Development of Guatemala. The study was conducted continuously between 2002 and 2010. Five years later, IOM plans to update the information to support decision-making and project development for the migrant population.

The NTMI, DTM and National Survey tools will target families in both urban and rural areas, from municipalities with the highest rates of migration in the three countries. Personal information collected by IOM will be confidential and only be used for statistical purposes.