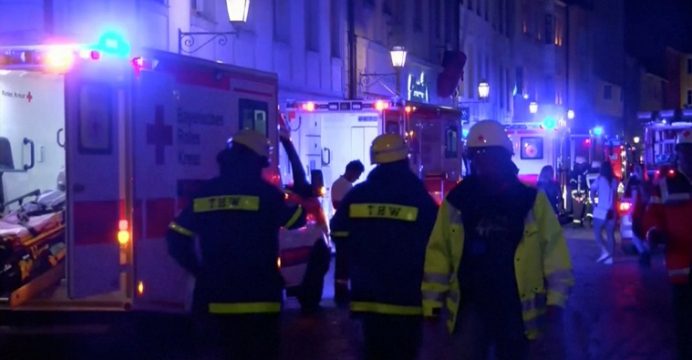 A failed Syrian asylum seeker has blown himself up and injured 12 other people with a backpack bomb near a festival in the south German town of Ansbach, reports BBC.

The 27-year-old man, who faced deportation to Bulgaria, detonated the device after being refused entry to the music festival, Bavarian officials say.

About 2,500 people were evacuated from the venue after the explosion. Bavaria has been on edge since a knife rampage on a train claimed by so-called Islamic State (IS) last Monday. 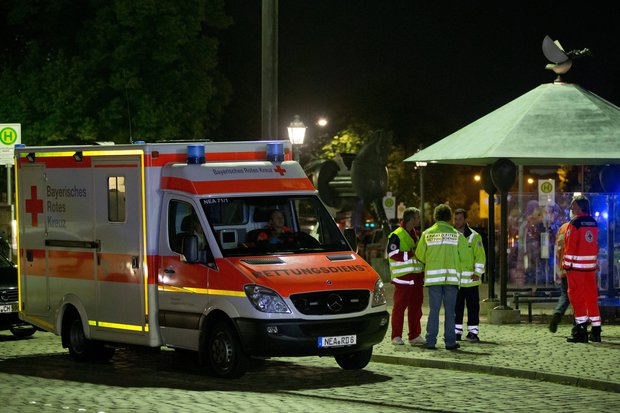 An ambulance at the scene of a bomb attack in Ansbach, Germany

The Ansbach blast is reported to have happened at about 22:10 (20:10 GMT) outside the Eugens Weinstube bar in the centre of the town, which has a population of 40,000 and is home to a US military base. The bomb went off close to the entrance to the Ansbach Open music festival.

A witness, Thomas Debinski, reported “panic” after the explosion, although some people had thought it was caused by a gas explosion.

“Then people came past and said it was a rucksack that had exploded,” he told Sky News.

CNN reports that, authorities said the bomber, who has not been named, entered Germany two years ago. He had applied for asylum in the country, but his application was rejected. However, he remained in the country, as it is German policy to not allow rejected applicants to return to war zones.

The bomber was known to police in Ansbach for previous offenses, including drug crimes, Herrmann said. He had also twice attempted suicide before the bombing.

“Because how this backpack and the bomb were packed, especially with so many metal splinters, which could have killed and injured many more people, this act cannot be purely assessed as a suicide,” Herrmann said.

The attack has not been confirmed as terrorism, Hermann said, but there are strong indications it may be. Police say it is unclear whether the attacker was an Islamist.

Bavarian state police are searching the home of the attacker, which is in a hotel currently being used as a refugee shelter, according to spokesman Michael Petzold.

Ansbach, with a population of about 40,000, is a major U.S. military garrison town, with around 5,000 members of the military living there along with civilians, contractors and retirees. There are three military installations in the Ansbach area, according to the garrison’s website.

The Ansbach bombing is the third attack in the southern German state of Bavaria in recent days, a spate of violence that has rattled the country and fueled criticism of Chancellor Angela Merkel’s immigration policies.

A week ago, a 17-year-old who had arrived in Germany as an unaccompanied minor from Pakistan or Afghanistan carried out a stabbing attack on a train in Wurzburg, about 70 kilometers (45 miles) from Ansbach.

The attack, which authorities said appeared motivated by ISIS propaganda, has left four patients still in hospital, one of them in an induced coma, medical officials say.

On Friday, an 18-year-old with dual German and Iranian nationality went on a shooting spree in a busy shopping district in the Bavarian capital, Munich, killing nine people before killing himself.

Police said the gunman was a mentally troubled individual who was obsessed with mass shootings and may have planned the attack for a year, and have not found a link to terror groups.

And on Sunday, hours before the Ansbach attack, a 21-year-old Syrian asylum seeker killed a woman with a machete in Reutlingen, in the neighboring southern German state of Baden-Wurttemberg.

The attacker had come to Germany a year ago, according to a police statement, and was known to police for property thefts and assault. The woman was 45 years old and from Poland, police said.