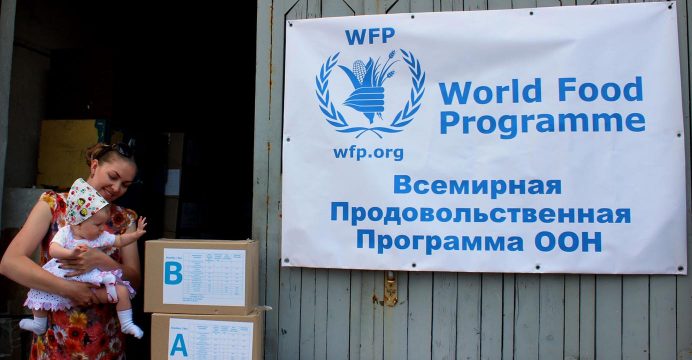 The United Nations World Food Programme (WFP) said today it will extend its emergency operation in eastern Ukraine to provide more than 280,000 conflict-affected people in the region with food assistance until the end of 2016.

A recent escalation in hostilities in eastern Ukraine has led to greater displacement, damage to vital infrastructures, and an increase in the level of poverty and vulnerability among the population.

The conflict has had severe impacts on economic and social rights on each side and has drastically eroded livelihoods and incomes of individuals and communities.

“The ongoing conflict has affected tens of thousands of people who no longer have means to secure their most basic food needs; most of them have exhausted their savings and lost their jobs,’’ said WFP Representative in Ukraine Dorte Ellehammer. “They are either trapped by the conflict or have fled their homes and are living in extremely difficult conditions.”

WFP provides food assistance to people who are particularly vulnerable in the conflict-affected areas of Donetsk and Luhansk, mostly in non-government controlled areas and across the ‘contact line’. Priority is given to the poorest and most food insecure among internally displaced people (IDPs), returnees and conflict-affected residents as well as female-headed households.

WFP will continue to assist people with cash-based transfers in communities hosting IDPs in relatively secure government-controlled areas where the food supply is adequate and markets are functioning well. WFP also provides food assistance to people living in hospitals or social institutions, many of whom are hosting IDPs and facing a dire financial situation.

The two-year-long conflict in eastern Ukraine has left around 1.1 million people food insecure, including more than 280,000 people who are severely food insecure and need immediate assistance. WFP urgently requires US$29.4 million to continue to assist them each month over the second half of this year. During this period, WFP will also re-evaluate food needs in the country to determine whether to further extend its emergency operation into 2017.

Since WFP began providing emergency assistance in Ukraine in November 2014, it has reached over 650,000 people in need through both food and vouchers.