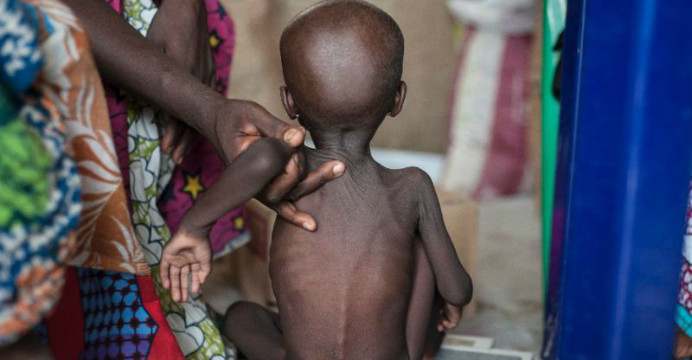 Malnutrition was one of the human tragedies of Boko Haram

Halima cries as her mother Yagana lifts her up to be weighed. The one-year-old girl’s belly protrudes over legs that are barely more than paper-thin skin and bone.

The baby has been treated for severe acute malnutrition for a week since arriving in the city of Maiduguri, northeast Nigeria, weighing just 4.5 kilograms (10 pounds).

The course of high-energy food supplements has helped her put on 0.7 kg. But she is still hardly bigger than a healthy newborn. 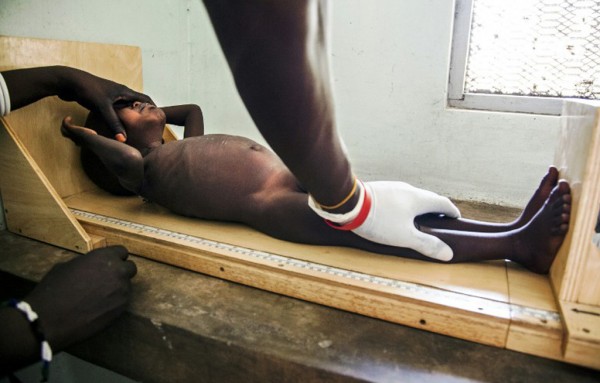 Flies crawl on her face as she sits on her mother’s lap at the nutrition clinic. Volunteers clean up her diarrhoea from the floor and Yagana wipes her daughter’s bare bottom with a dirty rag. Yagana, from the village of Dire, in the Mafa area of Borno, once had six children. Halima is the only one still alive, reports BSS.

“Soldiers told us to leave, just leave, leave,” she said. Baby Halima “just fell sick. We had no food.”

Northeast Nigeria has been torn apart for the last seven years by Boko Haram insurgents. At least 20,000 people have been killed and more than 2.6 million others left homeless by the Islamist fighters.

But as Nigeria’s military recaptures territory from the militants in the remote region, the full effects of the conflict are being laid bare as aid agencies are finally able to move in.

With homes and businesses destroyed and farmland devastated, the United Nations has warned that some 50,000 children could starve to death this year in Borno state alone if nothing is done.

“We estimate that there will be almost a quarter of a million children under five suffering from severe acute malnutrition in Borno this year,” said Unicef Nigeria representative Jean Gough.

“Unless we reach these children with treatment, one in five of them will die. We cannot allow that to happen.”

Doctors Without Borders (MSF) has said at least 188 people died in the month to June 22, mainly from diarrhoea and malnutrition, in Bama, some 70 kilometres (45 miles) from Maiduguri.

The UN has warned some 9.2 million people are facing food shortages in the wider Lake Chad region, where Nigeria meets Niger, Cameroon and Chad, and where Boko Haram has also attacked.

But there are shortfalls in international funding and concerns about current levels of assistance to the displaced in all four countries, as well as the abilities of local authorities to cope.

Yagana brought Halima to the informal settlement in Muna, on the outskirts of Maiduguri, where nearly 16,000 other people have sought refuge from Boko Haram and the effects of the conflict.

At the UNICEF-run clinic in Muna, Yakara Babagana weighs the most vulnerable children, takes their temperatures and carefully notes down the figures.

“They are not having enough food to eat and sometimes they are having diarrhoea and vomiting, which makes them lose weight,” she told reporters, beads of sweat glistening on her face in the heat.

“Every day we are getting about seven, sometimes even 10, sometimes even more than 10. For now, the children with severe acute malnutrition that we admitted, we have 363 over three months.”

Treatment — once a week over the course of eight weeks — includes vitamin A, anti-malarials and anti-biotics. Children are also dewormed.

Halima’s mid upper arm circumference (MUAC) measured 10.3 centimetres (four inches) when she was first seen. In seven days, it has gone up to 11.0 cm.

Yagana readjusts her tattered orange hijab and gets a thin black plastic bag full of food supplement sachets and heads out into the dust and heat, a listless Halima tied to her back.

“The mother is happy that the child is improving,” said Ifeanyi Chidozie Maduanusi, from the UN children’s agency.

Maduanusi blames lack of food, poor quality food, inadequate hygiene and sanitation for the rising number of malnutrition cases, as well as the relentless insurgency.

But he added: “We’re not looking to know who is accountable and who is not. We try as much as possible that any child that is malnourished is treated…

“NGOs and the government are doing so much but it’s not enough. There’s still room for improvement and the situation is evolving fast.”

How fast, though, is another concern. Muna, with its makeshift huts of branches, thatched straw and tarpaulin, isn’t a formal camp, yet more people arrive each day from the horrors beyond the city limits.

Sanitation is poor: residents live with their emaciated cows, donkeys and horses, and among droppings and human excrement.

Access to safe drinking water is limited while stocks of the high-energy food supplements and medication are dwindling, said Grema Musa Kolo, the camp coordinator.

Supplements are now being given to children whose MUAC measurements indicate they are “at risk from malnutrition” to prevent more of the most serious cases. Long lines of mainly women and children form outside the clinic hours before the sachets are distributed.

There have been deaths in Muna: last month seven children succumbed to a measles outbreak, prompting a mass vaccination programme. Kolo said more needs to be done soon to prevent more deaths.

“If they don’t intervene, the complication is finally they die. They have nothing in hand for them to eat. They left everything behind. They just brought their lives.

“In the shortest period of time, if there is not food there will be a lot of complications, that’s what I fear.”