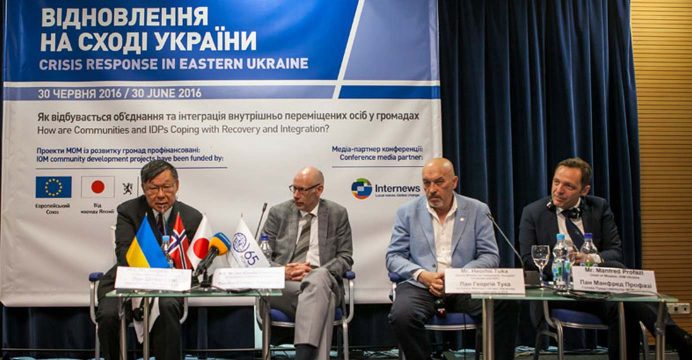 IOM promotes dialogue on recovery and IDP integration in Ukraine

Over 100 internally displaced persons (IDPs), community members from the East of Ukraine, and representatives of state authorities, the international community and civil society gathered on Thursday, 30 June, in Kyiv, to discuss needs going forward to integrate IDPs, as well as social cohesion, recovery and peacebuilding.

The conference, which provided a platform for dialogue and interaction, was jointly organized by IOM and Ukraine’s Ministry for Temporarily Occupied Territories and IDPs of Ukraine, and co-sponsored by the governments of Japan and Norway.

More than two years into the conflict, with over 1.7 million people officially registered as IDPs from the Donbas and Crimea, those directly affected and host communities are facing a multitude of complex and interrelated challenges.

The influx of IDPs into communities across Ukraine has been a strain on local budgets as well as on the local social infrastructure. This causes numerous problems which IDPs and host communities now have to overcome jointly.

A survey series on IDP integration*, recently launched by IOM Ukraine, reveals that housing and a lack of employment remain the biggest obstacles to the integration of IDPs.

Only slightly more than half of those employed before displacement managed to find a job at their new place of residence and about 40 percent of people surveyed said that they have to save even on food. About 70 percent of IDPs are renting accommodation, and their main concern is high rent.

“Communities which host IDPs need support from the state, as they are reliable supporters for IDPs. Well-organized work at the community level addresses the range of crucial issues IDPs are dealing with, i.e., social protection, accommodation, healthcare, education of children. The community’s capacity is key to solving the problems,” said Minister for Temporarily Occupied Territories and IDPs Vadym Chernysh.

With IDPs’ needs in housing and employment remaining high, and host communities requiring support with reconstruction and investment in social infrastructure, further assistance is needed from the international community and the government.

“IDPs and host communities need assistance now to overcome their challenges. What is needed are quick impact, grass root level initiatives that reach those in need immediately, for instance through further micro-grants and access to affordable micro-loans,” said IOM Ukraine Chief of Mission Manfred Profazi.

Ambassador of Norway to Ukraine Jon Elvedal Fredriksen underlined that Norway recognizes the huge challenge to Ukrainian society posed by the outflow of IDPs from the territories affected by the ongoing conflict. “The IDP situation in Ukraine is a European problem and needs European solutions, even if other migration-related challenges are now at the top of the agenda,” he said.

Ambassador of Japan Shigeki Sumi added: “If Ukraine is destabilized, it impacts the whole of Europe and the globe as well. That is why Japan pays so much attention to human security and recovery in Ukraine.”
Since the beginning of the crisis, IOM, supported by its donors, has provided support to over 100,000 conflict-affected people. Its current focus lies on providing income opportunities for IDPs and host communities, and facilitating social cohesion, recovery, and peacebuilding.
These efforts include business training for over 5,500 IDPs and local community members, with grants for equipment and vocational training provided to over 3,300 beneficiaries.
IOM has also supported some 50 communities in seven regions of Ukraine with community development training, social cohesion initiatives and refurbishment of social infrastructure, which will be used by approximately 150,000 locals and IDPs.
* In cooperation with the Ukrainian Centre for Social Reforms and StatInformConsulting agency, every month 600 randomly selected IDP households from all regions of Ukraine are surveyed in order to obtain updated information about their socio-economic status.