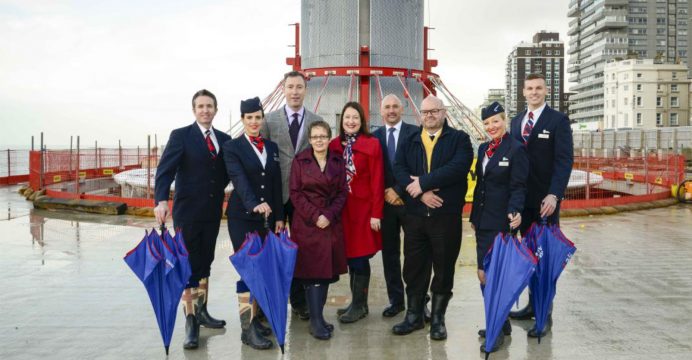 British Airways is ready to rock the Isle of Wight Festival this year with a secret party for music lovers. The airline is giving festival goers a glimpse into the hidden world of British Airways by throwing an exclusive two-night-only, backstage party inspired by the destinations it flies to from Gatwick.

Festival goers will be able to relax with a complimentary massage in a Caribbean themed zone, chill-out in a Moroccan Bedouin tent, relax on a Costa Rican inspired beach and for those who can solve a cryptic clue, sip a Manhattan cocktail at a New York pop-up bar.

KISS FM’s Dixon Brothers will head up a bill of talent to keep the party going until the early hours, while revellers will have the chance to win a pair of tickets to each of the airline’s new long-haul routes from Gatwick; San Jose in Costa Rica, Cape Town in South Africa, New York’s JFK and Lima in Peru. Colm Lacy, British Airways’ head of commercial for Gatwick, said: “We’re really excited to be back on the Isle of Wight again as it is always the festival that kicks off the summer season.

“With ‘BA’s Access All Areas’ we hope to give people a fun and exciting glimpse into what it’s like behind the scenes while being the first airline to bring a taste of our exotic destinations to the festival.” British Airways crew will also be on hand with some festival survival essentials to help festival-goers freshen up throughout the weekend.

This year’s Isle of Wight Festival takes place from June 9 to 12 and features sets from The Who, Stereophonics and Faithless. British Airways hosted a stage for emerging talent at the Isle of Wight festival in 2014, where nine brand-new acts from around the UK and Europe performed on the #BAMusic Stage.

To celebrate the start of the summer season the airline has also compiled a list of some of the most popular festivals customers will be travelling to this summer:

The doors to the White Island opened in May with opening parties at Ushuaia (May 28), Space (May 29), and Pacha (May 30) kicking off the season in style. The annual Radio 1 Weekend is often considered the ultimate peak of the season, with thousands of extra clubbers and tourists descending upon the party capital of Europe for an unforgettable weekend. This island demands glamour and stamina in equal measures. Getting there: British Airways operates flights to Ibiza from Gatwick, Heathrow, Stansted and London City.

The brains behind Coachella have set their sights on New York and this year sees the launch of Panorama Festival on Randall’s Island in Manhattan. Arcade Fire, LCD Soundsystem and Sia will be taking to the stage at what promises to be the Big Apple’s must-visit event of the summer. Getting there: British Airways customers can now travel in style to the city that never sleeps direct from Gatwick for less than £400 return and flights include a generous free checked baggage allowance, free online check-in, food, drink and seat allocation and complimentary in-flight entertainment on board.

You never know if it will rain or shine, so be sure to pack a mix of outfits. This year’s headliners include The Stone Roses and Calvin Harris. Getting there: British Airways operates three flights to Edinburgh from London City and Gatwick, and nine times a day from Heathrow.

At Benicassim the music doesn’t really get going till the sun goes down, and then doesn’t really stop until it comes up again so get ready to rave in your trainers from dusk til dawn. Getting there: British Airways operates ten flights a day to Barcelona from Gatwick and Heathrow with fares starting from £82 return.

Where better to beat the back to school blues than Bermuda with its postcard worthy beaches, Dark ’n’ Stormy cocktails and friendly locals. Head to the island in September when some of the world’s coolest bands descend on this 24-mile-long stretch of paradise. Getting there: British Airways operates daily flights to Bermuda from Gatwick with fares starting from £672 return. With its extensive network and codeshare partners, British Airways flies to more than 400 destinations worldwide.