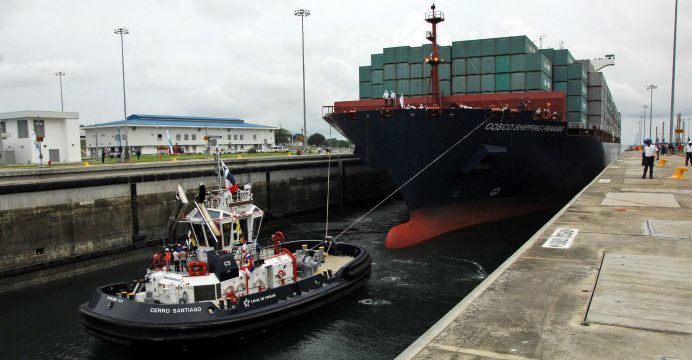 A giant Chinese-chartered freighter, baptized COSCO Shipping Panama especially for the occasion, made its way along the 80-kilometer (50-mile) waterway linking the Atlantic and Pacific oceans.

Its passage was to show off the third shipping lane and gargantuan locks built into the canal catering to vessels of its class, known as Neopanamax, or New Panamax, ships. 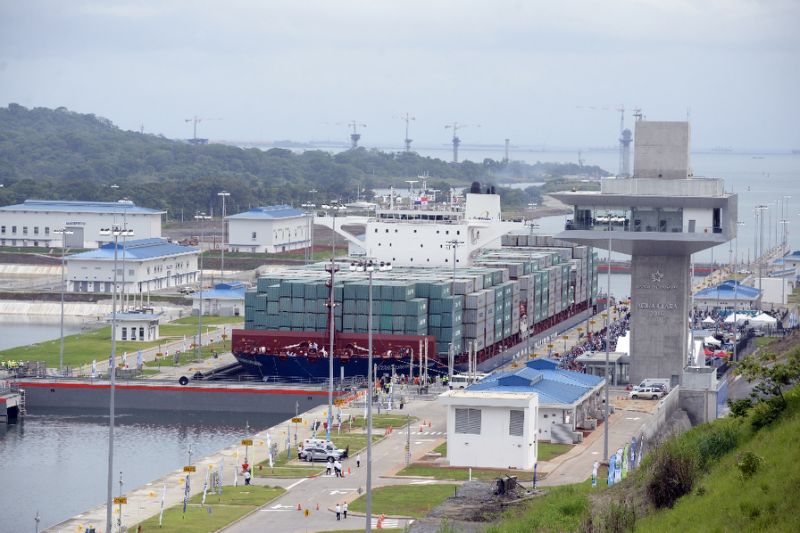 It stopped in the locks giving access to the Pacific, where VIPs and 25,000 Panamanians had gathered to celebrate the inauguration.

The freighter’s horn bellowed out triumphantly several times, triggering applause and cheers from the flag-waving crowd before they were treated to fireworks and a song-and-dance show relating the history of the canal.

President Juan Carlos Varela, who has hailed the renovated canal as “the route that unites the world,” led the event alongside foreign dignitaries including Chilean President Michelle Bachelet, all wearing white.

Varela, in his speech, admitted he had not initially backed the canal’s expansion, before he became president. But as leader, he said, he recognized it would deliver “a better future” for the country.

“This is the beginning of a new era,” said the head of the state Panama Canal Authority, Jorge Quijano.

The United States — builder of the original canal, which opened in 1914 and is still in operation alongside the additions — was represented at the ceremony by Jill Biden, the wife of the US vice president. The United States and China are the two most frequent canal users.

The expansion work was carried out since 2007 and finished two years late at a cost of at least $5.5 billion. Labor disputes and friction between the government and the European consortium that carried out the project dogged the work. Still outstanding are consortium demands for costs overruns of hundreds of millions of dollars.

Sunday’s celebrations however focused on the achievement, which promises to double the volume of cargo passing through the canal and allow it to accommodate 98 percent of ships on the oceans.

Neopanamax freighters can carry up to three times the cargo of older and smaller Panamax ships. Cruise ships built to the same dimensions typically double the number of passengers of the previous iteration.

The expansion will also allow Panama to lure gargantuan liquified natural gas (LNG) tankers. This is a lucrative segment of the shipping market untapped until now by Panama. Its importance has grown with the development of US natural gas exports, most of which head to Japan and South Korea.

Panama’s plan is to triple the $1 billion in revenue it currently gets from canal shipping fees. However, that goal might still be a decade away, according to officials from the Panama Canal Authority, the autonomous government agency that runs the waterway.

Panama might have been overly ambitious in calculating how fast it will see its investment pay off, particularly as world shipping prices that have dropped due to capacity oversupply.

“Everybody is always overly optimistic,” said Peter Shaerf, deputy chairman of Seaspan Corporation, a container ship group with a fleet of 100 vessels, more than half of which are Neopanamaxes.

But, he told reporters on Saturday, the canal itself is “one of the engineering wonders of the world” and it “will have a huge impact on trade.”

For Panama, the feat is a source of national pride, symbolizing the country’s enviable modernity compared to neighbors, and its consistently high economic growth.

The government hopes the glitz and historical nature of the broadened canal will help overshadow the blow the country took to its reputation this year with the “Panama Papers” scandal.

Revelations of offshore companies started by a Panama law firm, and used by the world’s rich and influential to dodge taxes and stash assets, have become the first thing many people think of when the Central American nation is mentioned.

But the canal, and the work to develop it for modern trade, is “the real face of Panama,” Quijano, the Panama Canal Authority chief, told reporters.