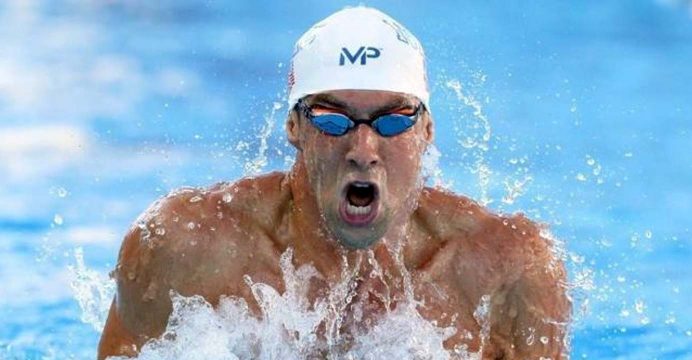 Phelps ready for his final races in the U.S.

After the cut-throat competition of the U.S. Olympic Trials, the Rio Games will be a swim in the park, Michael Phelps said on Saturday as the most decorated Olympian of all time prepared for his final races in the United States, Reports Reuters.

A reflective, relaxed and at times playful Phelps was in a sentimental mood as he and longtime coach Bob Bowman, now referred to as “Grandpa Bob”, met with the media on the eve of the trials where Phelps is down to compete in five events.

With only the top-two finishers in each event clinching tickets to Rio, the 18-time Olympic gold medalist will face the same pressure packed challenge as every other swimmer climbing onto the starting blocks during the June 26-July 3 meeting.

“I think for us being as strong of a swimming country as we are, I think there’s probably more pressure at Trials than the Games,” said Phelps. “We have almost 2,000 people here, and a maximum of 52 will make the team, so it’s a pretty small chance.

“So it is challenging, and I think this is more pressure, I don’t want to say more excitement, but more pressure here than the Olympics for sure. It’s harder here.”

Phelps will have a new motivation and a new fan among the soldout crowd of close to 14,000 on the days when he races with infant son Boomer in the stands watching his famous father.

Determined to share his journey into retirement, Phelps said that if he makes the U.S. squad and qualifies for his fifth Olympics, Boomer and his partner Nicole will also make the trip to Rio for his competitive swan song despite Zika fears.

“I’m looking forward to having him here and just being able to have my son, my first child, be able to watch me at some of my last competitions I think is pretty special,” said Phelps.

“I’m sure he’s not going to remember it, but just to be able to document that is something that will be cool and be pretty fun to share with him years down the road.”

Filled with regret over the way he prepared for the 2012 London Summer Games where he won four golds in what he declared would be his Olympic farewell, Phelps is keenly aware of the occasion and ready to embrace the moment.

It is certainly hard to ignore.

From his hotel bedroom, Phelps says he looks out on the arena where his face covers almost the entire side of the building.

“I said to somebody the other day, I was like, ‘Wow, 16 years ago I swam in my first trials’,” recalled Phelps. “I was like, ‘That is nuts!’ I’ve spent more than half of my life in a swimming pool and swimming at this level.

“I’m just going to go out and have fun, that’s really all I’m going to do, allow myself to swim however I’ve prepared.

“It could be good, it could be bad. Looking forward to it, though.”

Phelps was aged just 15 when he made his Olympic debut at the 2000 Sydney Olympics and failed to win a medal but in three Summer Games since has gone on to become the most decorated Olympian ever, capturing 22 medals.

Now 30, engaged and a dad, Phelps is preparing for a Rio program far less ambitious than in 2008 at the Beijing Summer Games where he claimed eight gold from eight events.

The swimming world has come to expect nothing but excellence from Phelps and he has rarely disappointed.

But Bowman insists that he just does not know what he is going to get from Phelps next week.

“I say this with 100 percent honesty, we’re in the ‘I don’t know stage’ right now,” said Bowman. “I think he’s trained a lot better than he has. He seems to be doing well in practice, and that’s all we can ask for.