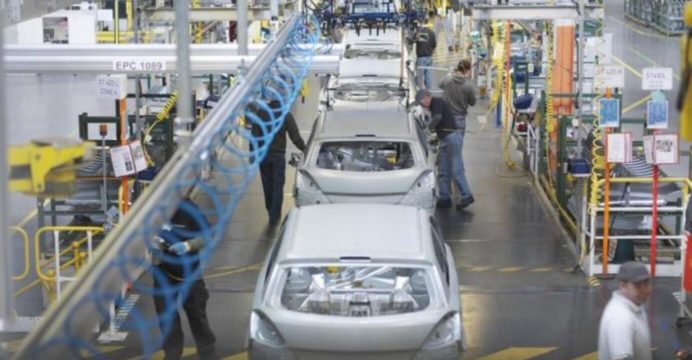 The number of new cars made in the UK fell again sharply last year plummeting to its lowest level since 1956. The drop marks a 10% fall from the year before which itself was a historic low.

But car makers are concerned the UK has not yet got a strategy to make the country competitive as a destination for manufacturing investment, reports BBC.

The government said it was “determined” to ensure the country remains a top global location for car manufacturing. Manufacturers hope that they will hit one million vehicles again in 2025 but getting to pre-pandemic levels would require major investment and new makers to come to the UK.

Firms are worried that the UK is falling behind the US and the EU when it comes to offering state aid to manufacturers. A very significant bit of US legislation – the Inflation Reduction Act – will offer billions in subsidies to car makers who create electric vehicle supply chains in the US.

Mike Hawes, chief executive of the SMMT, said this will “hoover up” a lot of international investment. An angry EU is considering retaliating by either explicitly relaxing state aid rules or doing so under the guise of extending Covid recovery or green technology-boosting programmes.

One of the benefits of Brexit was meant to be escaping from the straitjacket of EU state aid rules which limited the amount of support governments could give to favoured industries.

Mr Hawes conceded the UK could be in the unenviable position of offering less support to crucial industries than we did before we left the EU.

The SMMT said the figures were impacted by the closure of Honda’s factory in Swindon in July 2021 and the Vauxhall Astras no longer being made at Ellesmere Port since April 2022.

Mr Hawes said that the figures reflected how “tough” 2022 was for UK car manufacturing, though the country had still made more electric vehicles than ever before.

“The potential for this sector to deliver economic growth by building more of these zero-emission models is self-evident; however, we must make the right decisions now,” he said.

“This means shaping a strategy to drive rapid upscaling of UK battery production and the shift to electric vehicles based on the UK automotive sector’s fundamental strengths – a highly skilled and flexible workforce, engineering excellence, technical innovation and productivity levels that are among the best in Europe,” he added.

The figures also showed that record levels of electric cars were also made in the country last year with almost a third of all cars made fully electric or hybrid.

The SMMT said these cars would be worth £10bn in exports alone.

However, last year export volumes were down 14% compared to 2021, which was not enough to offset the UK volume increase of 9.4% with around two in ten cars sold in the country.

UK car production was further set back by the collapse of battery start-up Britishvolt last week.

The firm had planned to build a giant factory to make electric car batteries in Blyth, Northumberland but it struggled to turn a profit and ran out of money. Plans for the £3.8bn factory in Blyth were part of a long-term vision to boost UK manufacturing of electric vehicle batteries and create around 3,000 skilled jobs.

The UK currently only has one Chinese-owned battery plant next to the Nissan factory in Sunderland, while 35 plants are planned or already under construction in the EU.

A government spokesperson said: “We are determined to ensure the UK remains one of the best locations in the world for automotive manufacturing.

“Our success is evidenced by the £1bn investment in Sunderland in 2021, and we are building on this through a major investment programme to electrify our supply chain and create jobs.”