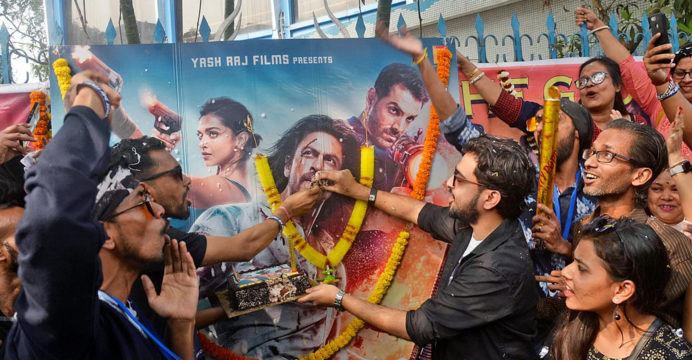 Wednesday marked the debut of “Pathaan,” one of the biggest films of the year 2023, and theaters all around India experienced an extraordinary influx of viewers that led to record-breaking scenes.

The internet is flooded with videos of SRK fans applauding the actor outside of theaters. A select group of SRK’s “Pathaan” admirers in Mumbai’s Bandra West hauled out enormous posters of the actor in that role, wore “Pathaan” t-shirts, and cut enormous cakes outside the theaters.

Numerous fans could be spotted gathered in front of theaters in Delhi as well to see the movie’s first showing of the day.

When asked about this obsession by one of the fans, the fan responded, “Shah Rukh Khan. We are thrilled that his film is finally being released after so many years, and we are confident that it will be a success. The famous Victory Theater in Pune witnessed the happiness of the many admirers who gathered to the venue. They were spotted enjoying themselves outside the theater, expressing their happiness by setting off firecrackers and vibrant smoke bombs.

Similar fandom was also observed in Kolkata, where one supporter exclaimed with joy, “I’m very happy. I reserved seats for both the morning and evening performances.