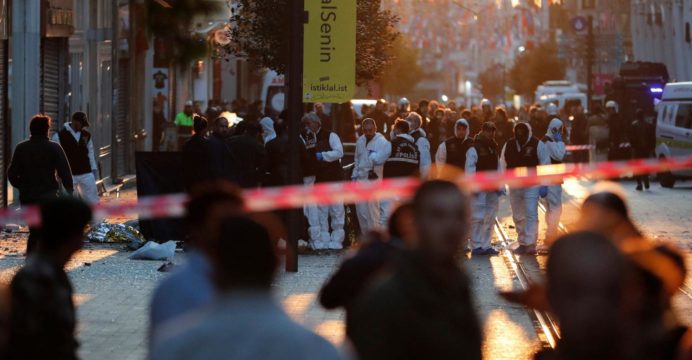 Four people were killed and 38 others were wounded on Sunday when an explosion rocked a busy pedestrian street in central Istanbul, sending people running from the fiery blast, according to the local governor and witnesses.

Ambulances rushed to the scene on the packed Istiklal Avenue, which police quickly cordoned off. The area, in the Beyoglu district of Turkey’s largest city, had been crowded as usual at the weekend with shoppers, tourists and families.

State broadcaster TRT and state-owned Anadolu agency said the cause of the blast was not yet known, reports Reuters.

“Four people were killed and 38 others were wounded according to initial reports,” Istanbul Governor Ali Yerlikaya said on Twitter, adding that the explosion occurred around 4.20 p.m. local time (1320 GMT).

A Reuters reporter saw a helicopter overhead and several ambulances in nearby Taksim Square.

“When I heard the explosion, I was petrified, people froze, looking at each other. Then people started running away. What else can you do,” said Mehmet Akus, 45, a worker in a restaurant on Istiklal.

“My relatives called me, they know I work on Istiklal. I reassured them,” he said.

The nearby Kasimpasa police station told Reuters all crews were at the scene but gave no further details.

Local media said crime inspectors were on the scene and Anadolu reported that the Istanbul chief public prosecutor’s office had launched an investigation into the blast.

While the cause of the blast was unknown, Istanbul and other Turkish cities have been targeted in the past by Kurdish separatists, Islamist militants and other groups.

The Turkish Red Crescent said blood was being transferred to nearby hospitals.

Turkey’s RTUK regulator imposed a broadcast ban on coverage of the blast around an hour after it occurred.

“My condolences to those who lost their lives in the explosion on Istiklal Avenue,” Mayor Ekrem Imamoglu said on Twitter.