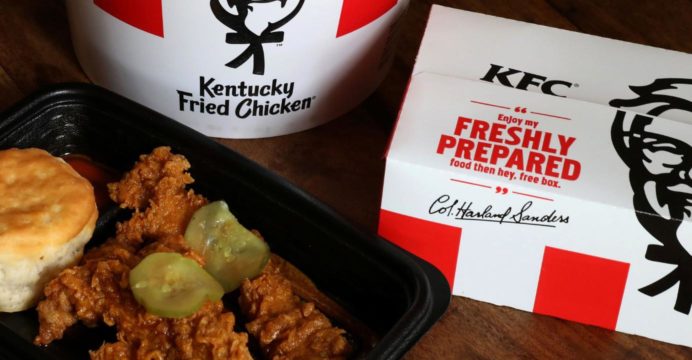 Why KFC apologized after sending a promotional message to customers in Germany?

KFC has apologised after sending a promotional message to customers in Germany, urging them to commemorate Kristallnacht with cheesy chicken.

The Nazi-led series of attacks in the country in 1938 left more than 90 people dead, and destroyed Jewish-owned businesses and places of worship. It is widely seen as the beginning of the Holocaust, reports BBC.

The message, heavily criticised for its insensitivity, was later blamed on “an error in our system”.The fast food chain sent an app alert on Wednesday, saying: “It’s memorial day for Kristallnacht! Treat yourself with more tender cheese on your crispy chicken. Now at KFCheese!”

Around an hour later another message was sent with an apology, according to the Bild newspaper.

“We are very sorry, we will check our internal processes immediately so that this does not happen again. Please excuse this error,” the message is reported to have said.

Germany takes the 9 November anniversary of Kristallnacht (the night of broken glass) seriously, with numerous memorial events and discussions scheduled to reflect the Nazis’ murder of more than six million Jewish people.

Daniel Sugarman, Director of Public Affairs at the Board of Deputies of British Jews described the original KFC message as “absolutely hideous”.

Dalia Grinfeld, the associate director of European affairs at the Jewish NGO Anti-Defamation League, tweeted: “How wrong can you get on Kristallnacht KFC Germany. Shame on you!”

In a statement issued to Newsweek magazine, KFC Germany blamed the message on a bot.

The fast food chain said the “automated push notification” was “linked to calendars that include national observances”.

It added that it “sincerely” apologised for the “unplanned, insensitive and unacceptable message” and said app communications had been suspended while an examination of them takes place.

“We understand and respect the gravity and history of this day, and remain committed to equity, inclusion and belonging for all,” the company finished by saying.