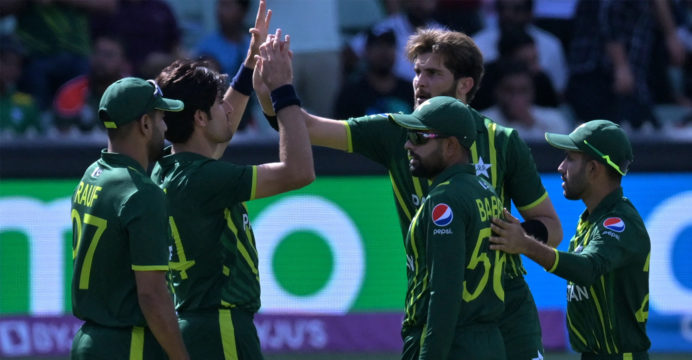 Babar Azam and Mohammad Rizwan found their form when it mattered most as Pakistan reached the final of the T20 World Cup for the third time, crushing New Zealand by 7 wickets in the first semifinal at Sydney Cricket Ground (SCG) here today.

Both of the openers who endured a patchy form in the group stage of the event, scored a half-century in the knockout stage after Pakistan bowlers bowled in a disciplined way to restrict New Zealand to 152-4.

It was believed the Pakistan batters would also find it tough to rotate the scoreboard on a slow pitch but the pitch looked better in the second innings. That however didn’t take the gloss off the beautiful batting display by Babar and his opening partner Rizwan.

Babar hit 42 ball-53 while Rizwan struck 57 off 43 as Pakistan reached the winning target of 153, losing three wickets and with five balls to spare. Earlier Pakistan reached the final twice in 2007 and 2009. In the inaugural edition in 2007, they lost the trophy to archrivals India but won the coveted silverware in 2009.

The victory however kept Pakistan’s record of not losing to New Zealand in the knockout match of the ICC tournament intact.

Babar and Rizwan took the game completely away from New Zealand sharing 105 in just 12.5 overs. It was the ninth-century partnership by the two openers, which was comfortably the highest and four better than Rohit Sharma and KL Rahul pair who has five to their name.

Fast bowler Trent Boult got the better of both of the batters for 33 runs in four overs but when he found a way to remove them, Pakistan already made their clear favorite to beat New Zealand.

Boult first had Babar caught by Mitchell to break the partnership before Rizwan holed out one to sweeper cover. 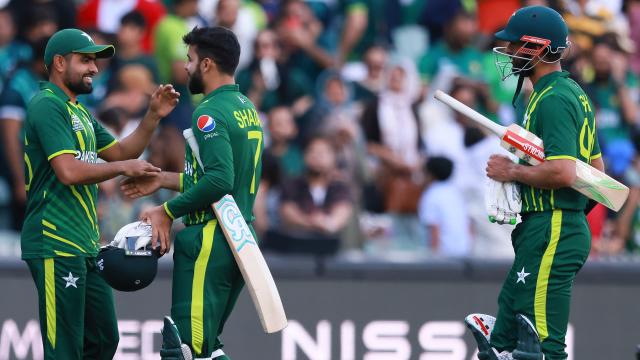 Pakistan was just 21 runs away to the victory when Rizwan departed. Mohammad Haris added 30 off 26 before being out in the penultimate as Pakistan found them a shot away to victory. Shaan Masood took the winning single to send Pakistan fans, who turned up in abundance in historical SCG,
into delirium.

Daryl Mitchell struck an unbeaten 53 off 35 to help New Zealand get past 150 run mark earlier.

Shaheen Shah Afridi was the best bowler for Pakistan with 2-24 and struck in just first over when he trapped Finn Allen leg-before for 4.

Allen started the day with the boundary of the first ball of Afridi after New Zealand skipper Kane Williamson opted to bat first.

But the celebrated fast bowler took revenge in the third ball and stifled the Kiwis with a display of fierce bowling.

As New Zealand tried to recover with Devon Conway and Williamson, Pakistan further slowed the pace, inflicting a run out that caused the dismissal of the former for 21.

Mohammad Nawaz further worsened New Zealand, removing Glenn Phillips for 6, as the Kiwis limped to 49-3 in eighth over.

Williamson and Mitchell brought the side back in contention with a 68-run partnership for the fourth wicket even though their innings never got the expected pace.

Afridi then came back to his second spell to get rid of Williamson who just looked set to go on berserk. Williamson made 46 off 42 with one four and one six.

Mithcell however took the side past 150, hitting three fours and one six in his 35 ball-53 not out. James Neesham was not out on 16 alongside him.