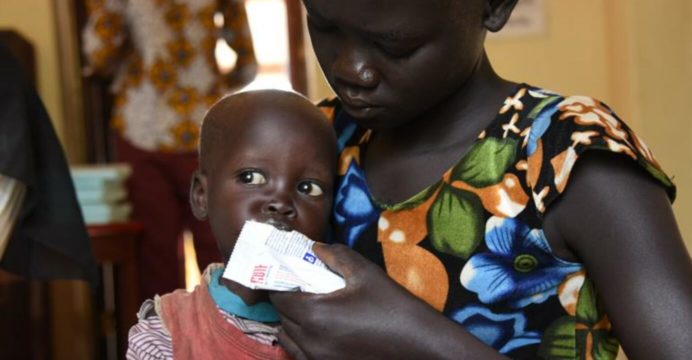 Hunger and malnutrition are on the rise across the flood, drought, and conflict-affected areas of South Sudan, with some communities likely to face starvation if humanitarian assistance is not sustained and climate adaptation measures are not scaled-up, the United Nations warned.

The latest Integrated Food Security Phase Classification (IPC), shows about two-thirds of the South Sudanese population (7.76 million people) are likely to face acute food insecurity during the April-July 2023 lean season while 1.4 million children will be malnourished.

The Food and Agriculture Organization of the United Nations (FAO), the United Nations Children’s Fund (UNICEF), and the United Nations World Food Programme (WFP) warn that the proportion of people facing high levels of food insecurity (IPC Phase 3 [crisis] or above) and malnourishment is at the highest level ever, surpassing levels seen even during the conflict in 2013 and 2016. The decline in food security and high prevalence of malnutrition is linked to a combination of conflict, poor macroeconomic conditions, extreme climate events, and spiralling costs of food and fuel. At the same time, there has been a decline in funding for humanitarian programmes despite the steady rise in humanitarian needs.

“We’ve been in famine prevention mode all year and have staved off the worst outcomes, but this is not enough,” warned Makena Walker, Acting Country Director for WFP in South Sudan. “South Sudan is on the frontlines of the climate crisis and day in, day out families are losing their homes, cattle, fields and hope to extreme weather. Without humanitarian food assistance, millions more will find themselves in an increasingly dire situation and unable to provide even the most basic food for their families.”

The unprecedented, multi-year flood sweeping the country is exacerbating already high levels of hunger caused by ongoing conflict and the global food crisis. Central parts of the country, which are the most heavily impacted by multiyear flooding, are the areas with the highest levels of food insecurity.

“Livelihood support is particularly needed to facilitate South Sudan’s self-reliance in food production. We know the potential exists as about 840 000 tonnes of cereals were produced in 2021, during a difficult year with climate change, floods, conflict and other factors. With the current cereal deficit of 541 000 tonnes, urgent investment in rural livelihoods is needed to increase production and self-sufficiency,” said Meshack Malo, FAO Representative in South Sudan.

While there have been marginal improvements in food security across some parts of the country, the nutrition crisis across South Sudan is deepening. All counties except one are showing a deterioration in their nutrition situation through June 2023, including 44 counties where the situation is deemed critical.

“Over the past three years, floods have dramatically affected an increasing number of people across South Sudan,” said UNICEF Acting Representative in South Sudan Jesper Moller. “Among those impacted, we find a growing number of food-insecure and malnourished children, which the international community cannot ignore. To effectively protect children from the effects of climate change, we must ensure we reach the most vulnerable children with an essential package of multi-sectoral social service interventions.”

“The IPC report is the product of months of data collection and analysis, with participation from Government, UN agencies, NGOs, and other partners,” added Sara Beysolow Nyanti, United Nations Resident and Humanitarian Coordinator for South Sudan. “Quality data like this is critical to formulating humanitarian response plans to help meet the needs of people in the country, and these figures show the people of South Sudan need support more than ever. It’s vital we receive commitments from donors for 2023 so we can prevent a worsening of the humanitarian situation across the country.”

Resourcing for the 2023 humanitarian response in South Sudan is urgently needed within the next few months or agencies will be unable to preposition humanitarian assistance in time for the next year, leaving millions of families at risk of spiralling deeper into hunger.