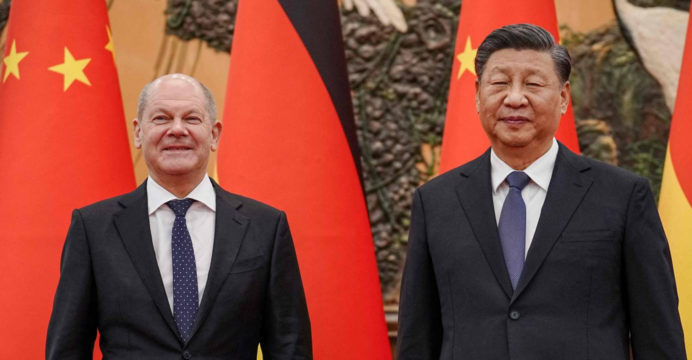 German Chancellor Olaf Scholz said in Beijing on Friday he was seeking to bolster the vital economic relationship with China. In light of the growing authoritarianism under President Xi Jinping, he has faced criticism for this trip.

The G7 leader is the first to visit China since the Coronavirus pandemic forced the world’s number two economy to close its borders.

In a meeting with Xi at the Great Hall of the People shortly after his arrival in Beijing, Scholz said he hoped to “further develop” economic cooperation while acknowledging some differences of opinion.

“It is good that we are able to have an exchange here about all questions, including those questions where we have different perspectives that’s what an exchange is for,” Scholz said, according to a German government source.

“We also want to talk about how we can further develop our economic cooperation on other topics: climate change, food security, indebted countries.”

The visit has sparked controversy, coming so soon after Xi strengthened his hold on power. From Taiwan to allegations of human rights abuses, tensions run high between the West and Beijing.