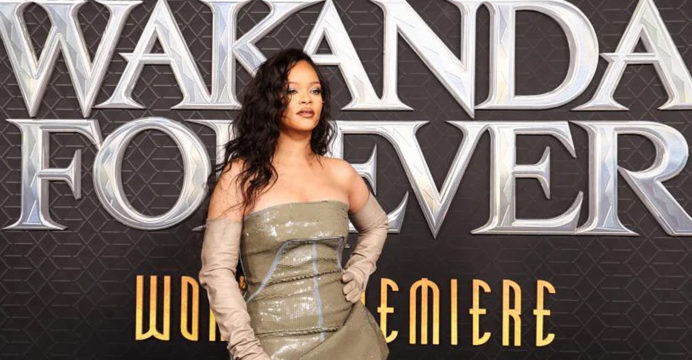 Rihanna to make music return with track for ‘Black Panther’

Rihanna is returning to music this week after launching high-fashion collections, a lingerie line, a makeup brand, becoming a billionaire and having a baby, her reps said Wednesday.

After a six-year hiatus, 34-year-old musician will release a new solo song called “Lift Me Up” on Friday. The song will be featured on the soundtrack for the upcoming Marvel sequel, “Black Panther: Wakanda Forever.”

This is her first solo single since 2016’s “Love on the Brain.” The new song by Rihanna will be released on her Westbury Road label in partnership with Roc Nation, Def Jam Recordings and Hollywood Records.

The singer who is known for the hits ‘Diamonds’ and ‘Umbrella’ posted a short preview of the new track, which had humming over strings.

This news arrives shortly after the NFL proclaimed that Rihanna would be the main attraction during the Super Bowl halftime show in February. This will be a grand return to the stage for the pop sensation.