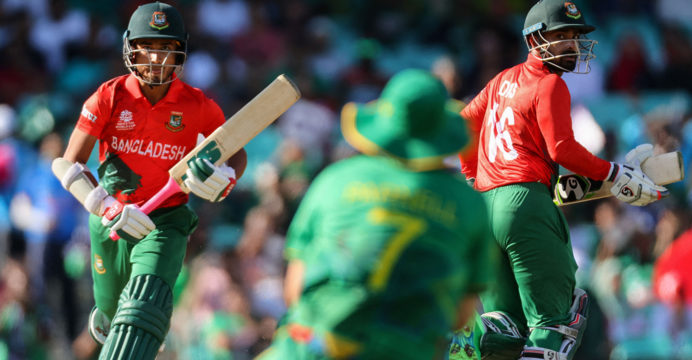 Bangladesh conceded their biggest-ever defeat in T20 cricket history when they lost by 104 runs to South Africa in their second game of the T20 World Cup at the Sydney Cricket Ground today.

In a crucial game where a victory could help them make a giant leap, the Tigers were shot out for just 101 runs in 16.3 overs after South Africa put up a mammoth 205-5. The massive defeat wrecked Bangladesh’s run rate as well.

Wicket-keeper Rillee Rossouw and fast bowler Anrich Nortje were the main destroyers as they caused Bangladesh’s defeat with a rampant display. Rossouw became the first cricketer in T20 history to hit a back-to-back century, hitting his career-best 109 off 56 which put the side in a commanding position.

Nortje also had his best career bowling performance, with a hostile bowling show that saw him claiming 4-10.

If Bangladesh hadn’t come back so strongly in the last five overs, South Africa’s score could have been bigger. Led by Shakib Al Hasan, Bangladesh was able to curb the aggression of the South African batters in this period and take three wickets for just 34 runs.