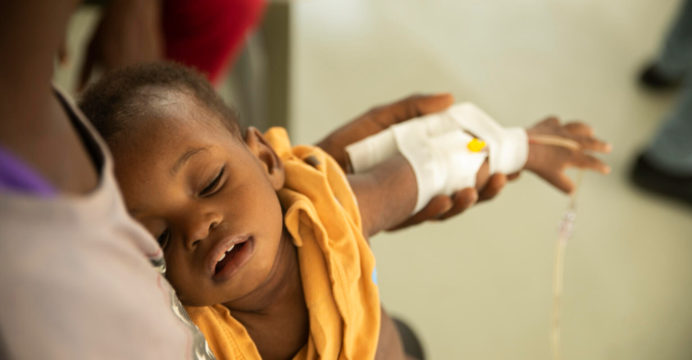 Cholera outbreak in Haiti hits over 1,700 suspected cases –half of them children

Since the onset of the cholera outbreak in Haiti, children below 14 years make up nearly half of the 1,700 suspected cases. Gang violence, fuel shortages and street blockades are hindering humanitarian access to safe water and health services for patients, increasing the risks of women and children dying of the disease.

“When you are unable to get safe drinking water by tap in your own home, when you don’t have soap or water purifying tablets, and you have no access to health services, you may not survive cholera or other waterborne diseases. The devastating impact of fuel restrictions and violence has made children the main victims of the outbreak,” said Bruno Maes, UNICEF Haiti Representative.

As of 22 October, the Ministry of Health reported 1,752 suspected cases and 40 deaths of cholera in Haiti, with nearly half of the cases in the urban-poor area of Cité Soleil in the capital city. It is feared that the actual number is significantly higher due to under-reporting.

As the waterborne disease spreads across Haiti, health centres, including those with cholera treatment centres, have limited access to fuel to operate normally, as armed gangs have blocked access to Haiti’s main port and fuel terminals. Many health personnel and families that may contract cholera have difficulties finding secure routes to report to health facilities amidst insecurity and high transport costs. Even when they reach to a health service, it is likely to be without electricity, as there is no fuel to operate the generator. Water trucking, the main safe water source for many areas of Haiti, also cannot reach poor neighborhoods where solid waste is piling up in the streets.

About 70,000 gallons of fuel are needed to serve 9 out of 16 cholera treatment centres in Port-au-Prince and some partner hospitals. So far, UNICEF has only been able to secure one third of this , which puts the lives of many women and children affected by cholera in danger. The access of the health personnel to the suspect cases in the communities is a major challenge, precluding the tracking, monitoring, and reporting the cholera cases.