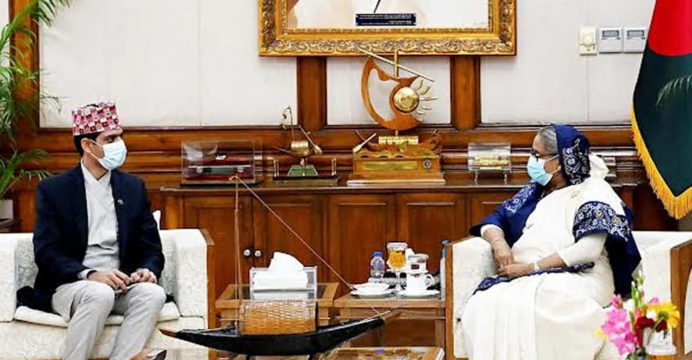 According to the ambassador of Nepal to Bangladesh, Ghanshyam Bhandari, Bangladesh will soon get an additional 40 to 50 megawatts (MW) of electricity from Nepal after the completion of a major power sector project.

This was mentioned by the representative during a Tuesday morning visit to Prime Minister Sheikh Hasina at her official house, Ganabhaban. Ihsanul Karim, the press secretary for the prime minister, briefed the media following the meeting.

According to the Nepalese envoy, “Nepal would be able to deliver more electricity to Bangladesh if that project is completed,” according to Karim.

As Nepal is closer to Banglabandha port than Burimari port, Ghanshyam Bhandari stated his nation’s significant interest in using it for export.

He stated that Bangladesh is very important to Nepal and that his country wishes to strengthen its economic ties with Bangladesh.

The Nepalese envoy expressed appreciation for Bangladesh’s support in the education sector and noted that many Nepalese students have been studying here for higher education.

The newly appointed ambassador was thanked by Prime Minister Sheikh Hasina, who also promised him full cooperation during his visit to Bangladesh.