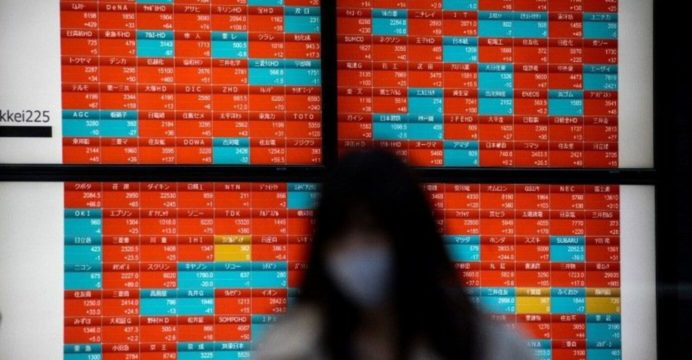 Equities fell in Asia and the dollar maintained its strength Thursday

Equities fell in Asia and the dollar maintained its strength Thursday ahead of the release of crucial US inflation data that could determine the pace of Federal Reserve interest rate hikes.

The release of the September report comes a day after minutes from the central bank’s latest policy meeting showed officials determined to win their battle against runaway prices by ramping up borrowing costs, though they did note the risk to the economy that posed, reports BSS.

Investors are growing increasingly worried that the strict monetary tightening campaign — including three bumper rate hikes in succession — will plunge the United States into recession.

While there are hopes for signs of a slowdown, traders have taken to the sidelines in case of more volatility. On Wednesday, figures showed wholesale inflation rose a forecast-beating 0.4 percent. After another day of losses on Wall Street, Asia was again in the red with traders in Hong Kong, Tokyo, Shanghai, Singapore, Seoul, Wellington, Taipei and Manila selling.

“That’s a tough market to be in. Until we get a bunch more data, markets will have to figure out how to find their footing.”

Minutes from the Fed’s September meeting suggested it will press on with a fourth straight 0.75 percentage-point hike next month, with policymakers noting a slowdown of growth and the jobs market would be “required” to tame inflation, adding that prices remained “unacceptably high”.

They also pointed out that prices had “not yet responded” to the previous tightening. Bank officials had for months stuck to a line that they will continue ramping up rates and hold them until they were satisfied they have slain inflation.

But the minutes said “several participants noted that, particularly in the current highly uncertain global economic and financial environment, it would be important to calibrate the pace of further policy tightening with the aim of mitigating the risk of significant adverse effects on the economic outlook”.

But added that “the balance of risks is rapidly shifting”.

“Elevated global economic and financial market uncertainty will make it essential for the Fed to calibrate its policy response.”

They expect to lift rates to around 4.6 percent in 2023, according to the median estimate — from the current 3-3.25 percent.

Expectations for even more tightening kept the dollar elevated across the board, and it hit a fresh 24-year high near 147 yen, more than one yen above the point at which Japanese authorities last month intervened to protect the currency.

Still, sterling held most of the gains it enjoyed Wednesday fuelled by expectations the Bank of England will unveil a huge rate hike next month in the wake of volatility in UK financial markets. The crisis in London saw the yield on 30-year government bonds bounce above five percent, while that on 10-year bonds hit 4.64 percent, the highest since 2008 in the midst of the global financial crisis.

The UK government’s increased borrowing costs are a reflection of market unease regarding the affordability of upcoming tax cuts aimed at supporting Britain’s recession-threatened economy. Oil prices were broadly flat after another drop Wednesday following a report from the industry-funded American Petroleum Institute indicating a huge jump in US stockpiles, suggesting weakening demand.