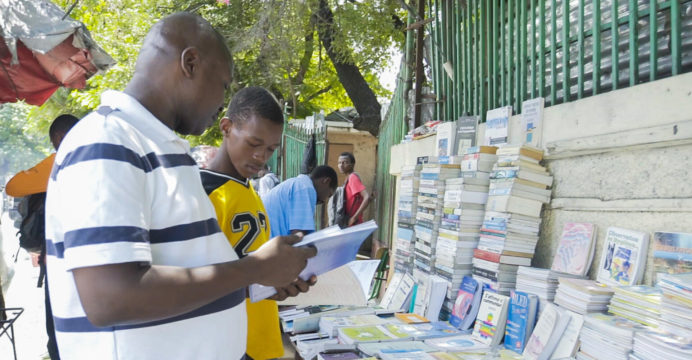 Increase in violence and resurgence of cholera in Haiti may leave more than 2.4 million children unable to return to school

At the start of a new academic year in Haiti, social unrest, gang violence, and a resurgence of cholera may keep over 2.4 million children out of classrooms, UNICEF warned today.

Despite the academic year starting on Monday 3 October, the majority of schools have not reopened and will continue to remain closed if violence does not subside. Considering various calls from civil society for students, parents, and teachers to move safely and the creation of environments that are conducive to learning, the Ministry of Education and Vocational Training (MENFP) expects a gradual return to school.

“Education is a child’s pathway to a brighter future. It is imperative that schools remain open and that children are able to attend them without fear,” said Bruno Maes, UNICEF Haiti Country Representative. “Continued school closures are feeding a perverse spiral – an out of school child is a child one step closer to being forcibly recruited into armed groups and furthering the violence that is keeping schools closed.”

The resurgence of cholera may also have an impact on children’s right to learn. Since cholera was first reported on 2 October, 152 people are suspected to have the disease, five deaths have been reported and 12 positive cases have been confirmed. Additionally, Médecins Sans Frontieres (MSF) has reported the death of two children from the disease.

Assessments by MENFP and UNICEF conducted in June show that over 200 schools were partially or completely closed by violence in Port-au-Prince, and nearly one in four schools were occupied by armed groups. In the last three weeks, an additional 27 schools have been attacked and looted by armed groups, depriving children of their right to education.

In the metropolitan area of Port-au-Prince, armed groups are occupying school buildings, further reducing access to education for Haiti’s children and young people. The upsurge in unrest across the country has also forced families to flee their homes, some of whom are seeking shelter in school buildings, and displacing children long distances from their schools.

More than 6,000 households, some 20,000 people including an estimated 8,200 children, have been forced to flee urban areas for their safety. Families are living with relatives and host families, and others have moved to provincial towns.

For children living among civil unrest, schools go beyond places of learning by providing them with the support of teachers and peers, access to school meals, and a sense of normalcy and psychosocial support, critical for their health and wellbeing.

Malnutrition, driven by several factors including violence, is also on the rise. The latest available data show that in Cité Soleil, the largest urban poor area of the capital, one in five children under the age of five is suffering from malnutrition.

Looting of UNICEF and partners’ premises will further impact the education sector in Haiti. On 6 October, large groups of people entered UNICEF warehouses in Les Cayes in southern Haiti. They looted medical and nutritional supplies, water supply repair equipment, and school materials, pre-positioned to respond to the humanitarian needs of 320,000 children, reducing their access to adequate learning environment.

“Unless urgent financial investments are made, the crisis is likely to get much worse,” said Maes. “We have seen this before in Haiti. The clock is ticking to reverse course. Immediate resources are needed to make sure every Haitian child can have the opportunity to learn, grow, and thrive.”

At the end of 2021, UNICEF issued a US$97 million appeal to reach 950,000 people, including 520,000 children in Haiti with humanitarian assistance. To date, UNICEF has only received a third of these funds.