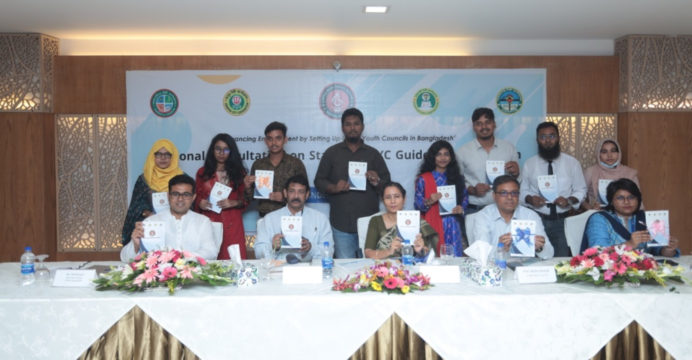 To develop leadership skills of young people and inspire them in the democratic process, SERAC-Bangladesh is implementing “Advancing Engagement by Setting Up Urban Youth Councils in Bangladesh” in four cities of Bangladesh (Narayanganj, Mymensingh, Rangpur and Rajshahi) that is funded by UNDEF and supported by UNHabitat. In line with the objective, a high-level national consultation was held on Friday, September 30, 2022 at a hotel in the capital, jointly organized by SERAC and the four City Corporations. The Urban Youth Council guideline was adapted by the city corporations and now it is presented to receive national level approval from the Ministry of Local Government in due course.
At the beginning of the meeting, Tasnia Ahmed, program manager of SERAC-Bangladesh, presented the process of the Urban youth council formation, and youth issues including the involvement of the citie authorities. The project aims to assist the Government of Bangladesh in achieving the United Nations Sustainable Development Goals-11 and 16. Also, through the project, the mentioned City Corporations jointly developed guidelines for their own City Youth Councils to be formed, and now ready to prepare youth voter lists, and eventually elect City Youth Councilors (20 City Youth Councilors in each City Corporation) from among the registered voters.
Executive Director of SERAC-Bangladesh SM Shaikat Moderated this meeting. Additional Secretary of the Ministry of Local Government, Rural Development and Cooperatives, Mustakim Billah Faruqui, Strategic Planner and Head of RCO Office of the UN Resident Coordinator in Bangladesh Subhra Bhattacharjee, and Professor Bashir Ahmed from the Department of Government & Politics of Jahangirnagar University attended as guests, while others including Govt. and Non-Govt. Officials, Civil Society Representatives, and Journalists. Also virtually attendees including 4 city corporation CEOs, Urban Planners, Douglas Ragan, program management officer of UN-Habitat, Olga Tsaplina, program officer of UN-Habitat and taskforce members of the urban youth councils.
At the event, Professor Dr. Bashir Ahmed mentioned that the Urban Youth Council initiative undertaken by SERAC-Bangladesh is highly commendable. It would also be very helpful if such a specific guideline could be adapted at the national level. However, the guidelines could vary according to the city. We have seen this in Europe but not in South Asia.

Subhra Bhattacharjee from the UN Resident Coordinator office in Bangladesh said that young people – women and men – must have a say in the decisions that affect their lives and futures. Welcoming the Urban Youth Council initiative she urged young participants to amplify the voices of young people less privileged than them, and ensure that the voices of the minorities, marginalized groups and persons with disabilities are addressed in decision-making spaces.

Also, the UYC task force members pointed out that it is necessary to build a bridge with the administration directly to raise the demands of the youth, which is possible only through direct involvement through this initiative. Youth employment can also be promoted through the city youth councils in the future.

Additional Secretary of the Ministry of Local Government, Rural Development and Cooperatives Mustakim Billah Faruqi said; among South Asian countries, the first Urban Youth Council project is being implemented in Bangladesh. The guiding principles that have been codified by the youth deserve appreciation. He expects this process will ensure active participation of the youth at local level.

The UYC guideline has been prepared based on the opinion of the youth council task force members at the guideline workshops under the four city corporations and the draft was finalized based on the review by the government and civil society representatives at consultative meetings. Later, the draft guideline were handed over to the mayors of the four City Corporations, and their approval was made after their thorough review and vetting.