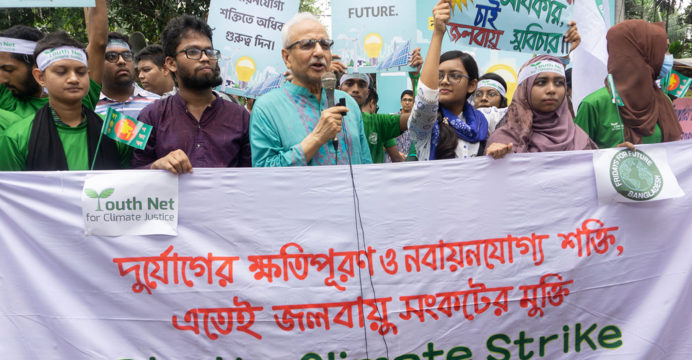 Bangladeshi youth activists call on the nation’s significant reliance on fossil fuel imports, particularly LNG imports, to be reduced. They also call for the cessation of activities that affect the environment and the promotion of the spread of renewable energy sources for a Bangladesh that is both energy secure and sustainable.

Youths call on critical stakeholders on the current electricity and oil crisis at hand in Bangladesh, highlighting the repercussions of importing costly fossil fuels, LNG being one, which is a heavy financial burden for the country. Rather, increasing the share of renewable energy in the new power sector master plan will enable just transitions. Youths further place demands to stop climate pollution, including putting pressure on developed countries to keep the global temperature increase within 1.5 degrees and to reduce carbon emissions by stopping multinational corporations from investing in fossil fuel-based power generation.

Fridays for Future Bangladesh and YouthNet for Climate Justice made their pledges at a rally held in front of the National Press Club in the capital on 23 September, as part of the global climate strike organized by the worldwide school student movement ‘Fridays for the Future’ to reduce global carbon emissions and claim compensation from historically responsible nations. The youth voiced solidarity with the call as part of the global climate strike on the streets and online with the slogan ‘We Want Climate Justice.’

They demanded justice for climate change and urged developed nations to formulate and implement a fast-track strategy for delivering compensation by setting up loss and damage financial facilities for climate-vulnerable countries and providing funds for adaptation action on a priority basis.
Youths call out developed countries and institutions for making false promises to reduce carbon emissions to prevent climate change. The world is now at a critical moment considering the dire effects of climate change, which the United Nations has called a red alert for humanity. Governments and investors must be accountable for nature and environment-destroying activities, mainly using harmful fossil fuels, and should promote renewable energy.

Sohanur Rahman, the coordinator of Youthnet for Climate Justice, said “Climate crisis has become a great disaster for our country and the world. To overcome the climate crisis, it is important to stop the fossil-fuel dependency of our country and foster renewable energy for the future. Similarly, it is necessary to ensure a fair share of polluting countries. This world is ours. So, it is our responsibility to protect this world. Hence, we demand climate justice for Bangladesh by ensuring a green future and a fair share of adaptation finance. Accelerating climate action and adapting or building resilience may seem complicated, but it is essential.”

Dr. Saleemul Huq, Director of, the International Centre for Climate Change and Development (ICCCAD) also expressed his strong solidarity with the youths. He said “It is clear that polluters are the reason why the world is going through an era of loss and damage from human-induced climate change; both governments and fossil fuel companies are guilty and must be held to account. It is time to confront the fossil fuel companies who are the real criminals behind the climate crisis – who have knowingly caused harm in order to continue to make profits and have also been influencing politicians in the polluting countries who have been blocking progress in the UNFCCC.”

Dr. Badiul Alam Majumdar, Vice President and Country Director of The Hunger Project was present at the strike. He said, “we must save our environment from destruction. We need to create awareness among people, so they behave responsibly; we also need to prevent all environmental destruction initiatives. This work requires collective action. And the youth of our country can play the most influential role here.”

This year, the global climate strike has taken place across the country in 24 districts where youths from schools, colleges, and universities carried banners, festoons, and placards with their messages. Dr. Ahmed Kamruzzaman Majumdar, Professor of Environmental Science, at Stamford University was also present at the strike along with many others.