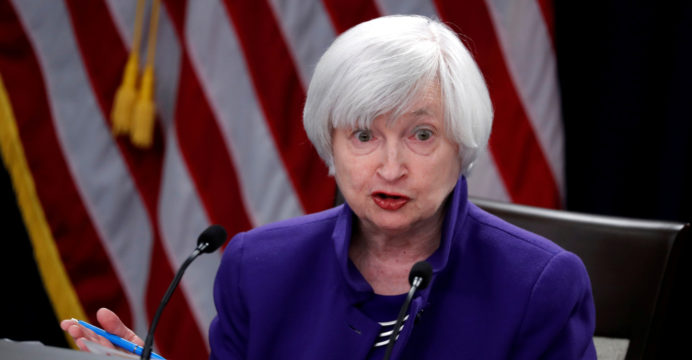 It is possible to bring down record-high inflation in the United States, Treasury Secretary Janet Yellen said

It is possible to bring down record-high inflation in the United States while maintaining a healthy labor market, US Treasury Secretary Janet Yellen said on Thursday.

Her comments come a day after the Federal Reserve hiked interest rates by 75 basis points for the third straight time, with Fed Chair Jerome Powell warning that cooling inflation would be painful for the US economy, reports BSS.

But “I believe there is a path through this that can succeed in bringing down inflation while also maintaining… a strong labor market,” Yellen said. “And I very much hope that the Fed will be able to succeed in doing that.”

Speaking at the Atlantic Festival, Yellen said there is likely “some inflationary pressure” caused by the shortage of workers in the labor market, which has driven wages up.

The Fed also updated its economic forecasts at the end of its monetary policy meeting Wednesday. It anticipates a slowdown in activity caused by the rate hikes, leading to a slightly higher increase in unemployment than previously predicted.

The unemployment rate is expected to average 3.8 percent in 2022, up from a forecast of 3.7 percent.

It will rise to 4.4 percent next year, up from an expected 3.9 percent.

In August, unemployment had fallen to 3.7 percent, one of the lowest rates in 50 years.

Some economists believe these forecasts are too low. Former Treasury secretary Larry Summers said on Twitter Wednesday that unemployment would probably have to exceed five percent in order to see a strong and sustainable slowdown in inflation.

Yellen acknowledged there is a need to “ease some labor market pressure,” but she disagreed that the unemployment rate has to increase so much.

“We can still have a good strong labor market without quite so much pressure… on wages,” she said.

US inflation slowed to 6.3 percent in July compared to the same month in 2021, according to the latest figures from the PCE index, which is one tool the Fed uses.

The US central bank is aiming to bring inflation down to around two percent.

Another inflation index, the CPI, showed annual inflation at 8.3 percent in August.