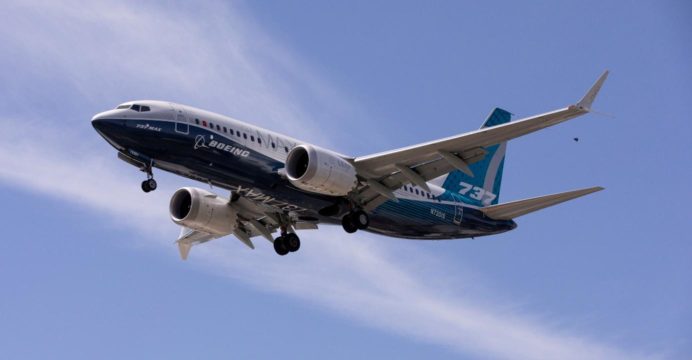 Boeing is to pay out $200m (£177.5m) over charges that it misled investors about two fatal 737 MAX crashes. The US stock market regulator said the aviation giant and its former chief executive Dennis Muilenburg made false statements about safety issues.

Boeing “put profits over people” in an effort to rehabilitate its image, according to the Securities and Exchange Commission (SEC). The 737 MAX was grounded for 20 months after two crashes killed 346 people.

As part of the settlement Mr Muilenburg will also pay a penalty of $1m, reports BBC.

“In times of crisis and tragedy, it is especially important that public companies and executives provide full, fair, and truthful disclosures to the markets,” SEC Chair Gary Gensler said in a statement.

Boeing and Mr Muilenburg “failed in this most basic obligation,” he added.

The SEC’s statement also said that both Boeing and Mr Muilenburg did not admit or deny the regulator’s findings.

“We will never forget those lost on Lion Air Flight 610 and Ethiopian Airlines Flight 302, and we have made broad and deep changes across our company in response to those accidents,” Boeing said in response to the SEC’s announcement.

“Fundamental changes that have strengthened our safety processes and oversight of safety issues, and have enhanced our culture of safety, quality, and transparency,” the company added.

The SEC said a fund will be established for investors who suffered losses due to the misleading information between 2018 and 2019.

‘No survivors’ in Ethiopia plane crash

On 29 October 2018, Lion Air Flight 610 crashed into the Java Sea 13 minutes after taking off from Jakarta’s Soekarno-Hatta International Airport, killing all 189 passengers and crew.

Less than five months later, Ethiopian Airlines Flight 302, another Boeing 737 Max on its way to Kenya, crashed six minutes after leaving Ethiopia’s capital Addis Ababa. All 157 people on board were killed. The crashes were linked to a flight control system called the “Maneuvering Characteristics Augmentation System” (MCAS) in the Boeing 737 MAX.

The SEC said that “after the first crash, Boeing and Mr Muilenburg knew that MCAS posed an ongoing airplane safety issue, but assured the public that the 737 MAX was safe to fly.

The crashes have cost Boeing more than $20bn, including payments to families of those killed in the crashes.

In the wake of the incidents, the US Congress passed new legislation reforming how the country’s aviation regulator, the Federal Aviation Administration (FAA), certifies new planes. A small number of trials are expected to start next year to resolve outstanding claims.