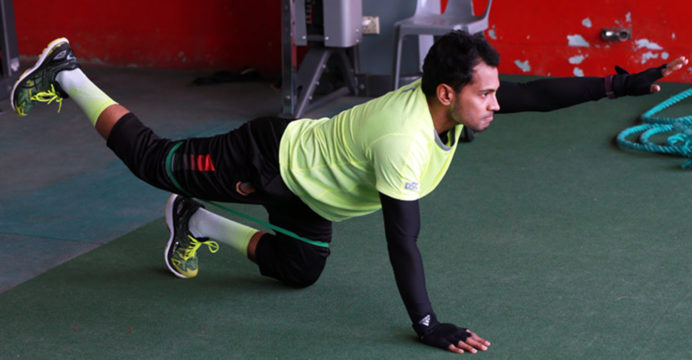 Mushfiqur Rahim, the wicket-keeper batsman for Bangladesh, hurt his knee today at the Sher-e-Bangla National Cricket Stadium while working out alone.

Dr. Monjur Hossain, a member of the Bangladesh Cricket Board (BCB) medical staff, verified that the 35-year-old cricketer required six stitches around the shin bone below his left knee.

The veteran would be under monitoring for at least two weeks, he added.

“Mushfiqur suffered a knee injury during a gym session and he needed six stitches on the left knee. It looked like he would need at least two weeks to recover,” he told the reporters here today.

After Bangladesh’s terrible Asia Cup run, Mushfiqur recently announced his retirement from T20 international cricket. Additionally, he appeared out of sorts during the competition, which led to harsh criticism.

Even though he stopped playing T20 cricket, Mushfiqur kept up his personal training to stay in shape. The National Cricket League (NCL) tournament is scheduled to begin on October 10, and he recently notified the BCB that he would be available for the duration of it. Mushfiqur will represent Rajshahi Division in the competition.

But the latest injury put his participation in the NCL in doubt.

The NCL is considered as the preparation platform of Bangladesh for their upcoming Test series against India at home, slated to be held just after the T20 World Cup in November. The BCB president Nazmul Hassan Papon earlier said Mushfiqur will remain the vital cog of the Test team despite his retirement from the T20 International cricket.